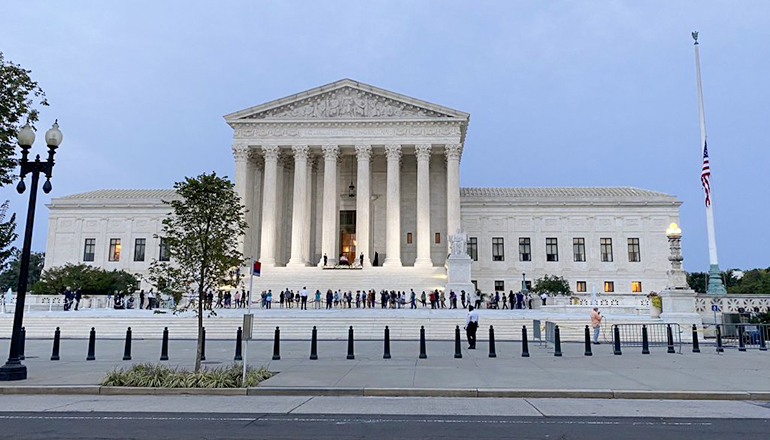 Until the arguments are heard and the court issues a ruling, the $400 billion Biden plan is on hold due to a nationwide injunction ordered in the lawsuit by the six GOP-led states — Nebraska, Missouri, Arkansas, Iowa, Kansas, and South Carolina.

The Supreme Court declined to lift the order from the lower courts but decided to fast-track arguments for the case.

In November, the Department of Education announced it was extending the pandemic-era pause on federal student loan repayments while legal battles are fought over it in the courts, so borrowers for now won’t be on the hook for payments.

“We welcome the Supreme Court’s decision to hear the case on our student debt relief plan for middle and working-class borrowers this February. This program is necessary to help over 40 million eligible Americans struggling under the burden of student loan debt recover from the pandemic and move forward with their lives,” White House press secretary Karine Jean-Pierre said in a statement.

“The program is also legal, supported by careful analysis from administration lawyers.  President Biden will keep fighting against efforts to rob middle-class families of the relief they need and deserve.”

In a statement, Mike Pierce, the executive director of the Student Borrower Protection Center, which advocates for student debt cancellation, also said the Biden administration’s debt relief plan is legal.

“Once again, the credibility of the Supreme Court rests on its ability to recognize what we all know to be true: canceling student debt is legal and necessary to secure the financial futures of 40 million Americans,” he said.

“We remain confident that the President’s right-wing opponents will not bait him into becoming America’s student debt collector and will keep fighting in and out of court to keep his promise to cancel student debt.”

But the top Republican on the U.S. House Education and Labor Committee, Rep. Virginia Foxx of North Carolina, called the student debt relief plan a “bailout,” and said that she expects the Supreme Court to strike down the plan, much like the lower courts.

“President Biden’s proposal is illegal, and I’m glad to see the Court will soon have the chance to ensure not one taxpayer dollar is used in support of this student loan scheme,” Foxx said. “After multiple failures in lower courts to push forward with this illegal bailout, one fact remains clear: The rule of law will never bend to the will of this administration—not for one second.”

The White House has contended its program is legal and is holding on to applications for it already filed, although the Department of Education stopped accepting new applications following a second decision from a federal judge in Texas who separately ruled the program was unlawful.

The administration had asked the court to vacate the injunction in the case brought by the six states. The court said a decision on that would be deferred until it hears arguments in the case.

“The Clerk is directed to establish a briefing schedule that will allow the case to be argued in the February 2023 argument session,” the Supreme Court said in its order issued Thursday.

In mid-November, the unanimous ruling by the 8th Circuit Court of Appeals in St. Louis issuing the national injunction came after the states argued that the loan relief program threatens those states’ future tax revenues and that the plan by the Biden administration overrode congressional authority.

A federal judge in Missouri originally rejected the six-state lawsuit, ruling that those states lacked legal standing to pursue a case on the grounds that they will be harmed in the future.

However, the appeals court found that in Missouri, that state had shown likely injury, as a major loan servicer — Missouri Higher Education Loan Authority, known as MOHELA — that is based in the state would lose revenue because of the debt relief program.

“Due to MOHELA’s financial obligations to the State treasury, the challenged student loan debt cancellation presents a threatened financial harm to the State of Missouri,” according to the three-judge appeals panel. “Missouri, therefore, likely has legal standing to bring its claim. And since at least one party likely has standing, we need not address the standing of the other States.”

In late August, President Joe Biden announced he would cancel up to $20,000 in federal student loan debt for Pell Grant borrowers and up to $10,000 for all other borrowers with an income of less than $125,000 for an individual and $250,000 for a household.

The program would only apply to current borrowers, not future ones, and income levels for the 2020 and 2021 tax years would be considered. Student loan borrowers who have private student loans would not be eligible.

Jane Norman contributed to this report.