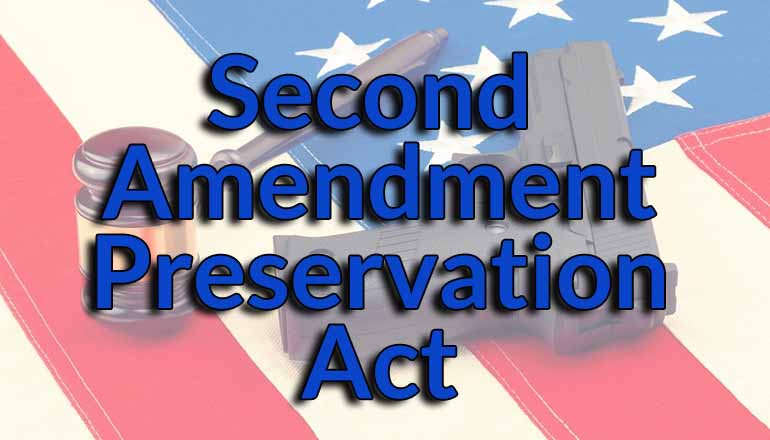 On Wednesday, the department filed suit to prevent Missouri from enforcing its Second Amendment Preservation Act (SAPA), a law that allows citizens to file suit for up to $50,000 if they believe their second amendment rights were violated by police enforcing federal gun laws.

The Justice Department complains Missouri’s law has hindered cooperation and activities between federal, state, and local law enforcement. In a statement, the department cited local police agencies leaving joint federal task forces as an example of the fallout from the law’s passage.

The complaint also argues that the law is unconstitutional due to its conflict with the “constitutional principles” of federal law supremacy. The government argues the restrictions imposed by the statute that a state does not have the power to declare a law “invalid.”

“The Biden Department of Justice has now filed yet another partisan lawsuit that seeks to attack Missourians’ Second Amendment rights,” Schmitt said.

The federal case is the third lawsuit to challenge Missouri’s preservation act since it was passed in 2021. St. Louis, St. Louis County, and Jackson County filed suit to block the law last year. The Missouri Supreme Court heard oral arguments in the case last week. The plaintiffs in the suit are also arguing that the law is unconstitutional.

Separately, a suit filed by Arnold, a suburb outside of St. Louis, is backed by more than 60 Missouri police chiefs who say the law needs to be clarified so police know how they can and can’t work with federal agencies.

The law has drawn a host of critics, ranging from law enforcement agencies to gun control advocates.

Earlier this month, Missouri Police Chiefs Association President Bob Muenz said while he supports the idea of a law that protects the Second Amendment, the measure’s “lack of clarity” is making police work more difficult.

Muenz said under SAPA, Missouri police are not sure what they can and can’t do with federal agencies, causing police to end federal partnerships for fear collaborations could land their departments in court.

“It opens up law enforcement and the municipality to potential lawsuits,” Muenz said. “No department — no police chief — wants to be a test case for a lawsuit, or a supreme court case or a challenge to the legislation.”

Senior Counsel and Director of Local Policy for the gun control advocacy group Giffords Allison Anderman said SAPA laws are among the most extreme gun rights laws being passed in the country.

“This is like nothing we’ve ever seen,” Anderman said. “This is a state going after its own law enforcement officers and subjecting them to criminal liability or a bankrupting sum of money for helping to enforce laws.”

A Second Amendment Preservation Act is being considered in 16 other states.

Sen. Zach Nunn, the Republican who introduced the Iowa legislation, said the law is a way for the state to protect itself from what he calls “federal overreaches” by the Biden administration on Second Amendment rights.

Kavahn Mansouri is an investigative reporter for KCUR 89.3 and the Midwest Newsroom. He previously reported for the Belleville (Illinois) News-Democrat, where his beat focused on covering local government, with a mission to hold elected officials and public agencies accountable. He also contributed to the breaking news beat daily and maintained the paper’s Public Pay Database, which tracks salaries and wages at taxpayer-funded institutions throughout the state. A native of St. Louis, Kavahn is a graduate of Webster University.