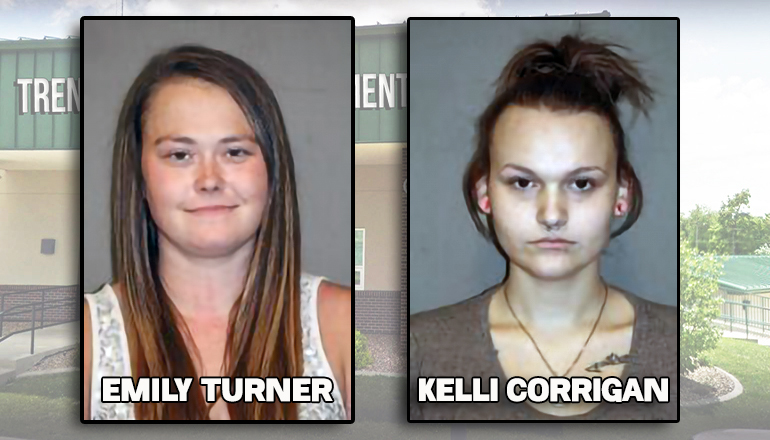 Two women have been arrested for their alleged participation in spray painting incidents in Trenton on July 5.

Two counts of property damage in the first degree have been filed against Kelli Danielle Corrigan of Trenton and Emily Nichole Turner of Jamesport. Both are 21 years old. Corrigan was arrested Sunday. Turner surrendered at the Grundy County Law Enforcement Center on Friday.

Both women are accused of acting with a third defendant, Aaron Zachary Wolf-Moffitt of Trenton, regarding the incidents. Police noted spray paint was observed on the NCMC Russ Derry baseball facility, a utility light post, a Carquest storage unit, as well as city of Trenton four-way stop signs and a one-way sign.

Bonds are $5,000 cash for Wolf-Moffitt, $5,000 cash with a ten percent deposit allowed for Corrigan, and $7,500 cash for Turner. Additional charges from July 10 against Turner are third-degree assault and tampering with or attempting to tamper with a victim in a felony prosecution. Court information accuses Turner of causing physical injury to Corrigan by allegedly punching her in the mouth, causing a cut lip. She’s also accused of disobeying a legal investigation as a witness in property damage incidents.

All three defendants are to appear July 27 in the Associate Division of Grundy County Circuit Court.