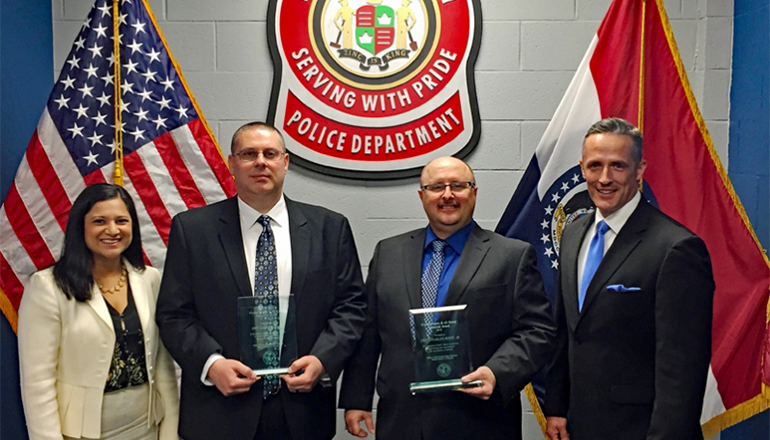 Timothy A. Garrison, United States Attorney for the Western District of Missouri, presented the annual Crystal Kipper & Ali Kemp Memorial Award to two detectives in the Joplin, Mo., Police Department in recognition of their valued contributions to investigating and prosecuting those who prey upon children.

“For over 24 years, these two individuals have exemplified what true champions for child victims are,” said Garrison, “hardworking, tireless, and relentless in their pursuit to ferret out child predators and pursue justice for child victims. These officers leave no stone unturned in their pursuit to catch child predators. Their dedication and persistence over the years identified and ultimately protected countless child victims. Thanks to their dedication, many dangerous sexual predators have been taken off the streets.”

This is the 14th year for the award to be presented in memory of Crystal Kipper and Ali Kemp, two young women who were both fatal victims of tragic crimes. Crystal Kipper was an 18-year-old Gladstone, Mo., resident who was murdered after her car broke down on Interstate 29, just north of Platte City, on Feb. 24, 1997. Ali Kemp was a 19-year-old Blue Valley North High School graduate who was murdered on June 18, 2002, while she worked at the Foxborough neighborhood swimming pool in Leawood, Kan.

The Crystal Kipper & Ali Kemp Memorial Award is presented by the U.S. Attorney’s Office each year to recognize the outstanding work of an individual or organization in recognition of a valued contribution to preventing and responding to the exploitation of children.

When a mother located a tablet that contained images of the sexual abuse of her 11-year-old daughter, Det. Roller and Det. Root leaped into action. Within hours of receiving multiple devices, Det. Roller began his work of forensically examining each device for evidence. Det. Root met the defendant at the jail and obtained a full confession within a couple of hours.  Due to the evidence that Det. Root was able to get from the defendant and the forensic evidence Det. Roller was able to recover from the devices, David Lee Perkins was indicted by a federal grand jury for the aggravated sexual abuse of a minor, sexual exploitation of a minor to produce child pornography, and receipt and distribution of child pornography.

Perkins pleaded guilty to two counts of the federal indictment, admitting that he used the child victim to produce child pornography and that he distributed child pornography. However, facing a 30-year mandatory minimum, Perkins elected to go to trial last January on the remaining count of aggravated sexual abuse. Perkins was convicted of that charge as well, and remains in federal custody pending a sentencing hearing on June 5, 2018.

Det. Root and Det. Roller also pursued leads that led them to multiple other children who had been abused by Perkins. Their excellent work investigating this case led to the discovery of another child predator in North Carolina, Don Blankenship, who was charged and convicted of five counts of indecent liberties with a child under North Carolina state law in Catawba County, North Carolina.