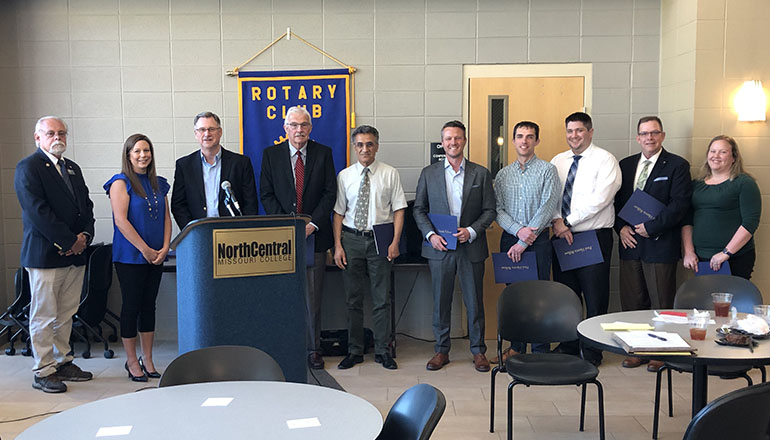 Twelve members of the Trenton Rotary Club have been honored as Paul Harris Fellows, named for the founder of Rotary.

For each $1,000 contribution to the Rotary Foundation, the club can designate a member as a Paul Harris Fellow. Receiving the designation at a recent meeting were Brent Wyant, David Bain, Doctor Hessam Borhani, Jacob Black, Michael Ormsby, Mike Stegman, Ryan Tepen, Tara Walker, Amy Lewis, Donita Youtsey, Mark Hackathorn, and Micah Landes. As a result, Trenton becomes the 9th club among 56 in District 6040 to be a 100 percent Paul Harris member club.

Trenton Rotary also donated to the Foundation in memory of the late Joe Brinser, a long-time member and former club president. His brother Robert, and son Justin Brinser, were present and designated as honorary Paul Harris Fellows.

Among guests at the meeting was Rotary District 6040 Governor Donald Gladhart of St. Joseph. He presented a pin to Dan Wilford of Laredo for contributions to Rotary.

The Trenton Club is a yearly contributor to the Rotary Foundation, which funds various projects worldwide. In the past, Trenton Rotary has received foundation grants, including the purchase and installation of handicap playground equipment at Eastside Park and renovation of a room at Rissler school for use by Bright Futures Trenton.