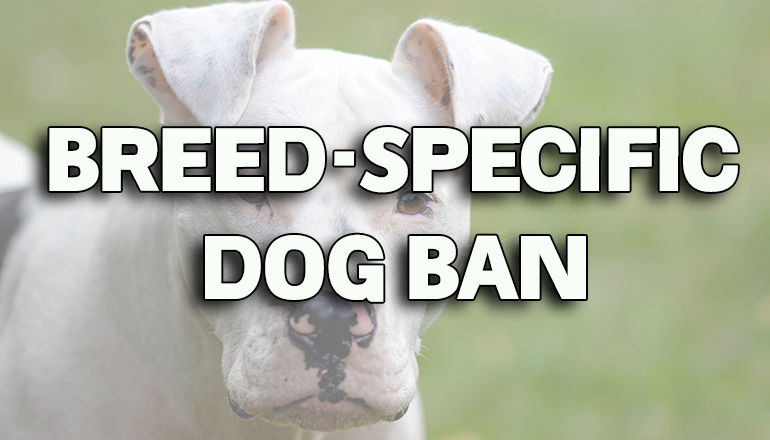 With six councilmen present, Trenton’s Administrative Committee is recommending the repeal of the current ban on specific breeds of dogs. In addition, the committee wants the Mayor to appoint, with council consent, an animal welfare committee of citizens to offer recommendations on animal control issues.

Councilman Danny Brewer made the motion to lift the breed ban and two other committee members – David Mlika and Robert Romesburg – made it a 3 to nothing vote to repeal the city ordinance (section 210.215). A fourth administrative committee member, Kevin Klinginsmith, was absent from the city hall meeting last night.

The next Trenton City Council meeting is Monday night. Whether the full council takes any action then remains to be seen as the administrative committee also recommended forming an animal welfare committee for civilians to review several things including provisions involving animal neglect and abuse and their penalties; owning, keeping, or harboring dangerous dogs; and whether to include tethering provisions.

Councilman Lance Otto, who’s not on the administrative committee, presented his research on tethering including general provisions he gleaned from another northern Missouri community that has enacted provisions related to tethering. When he voted at a council meeting last year not to repeal the breed-specific ban at that time, he pledged to research various issues and reported last night on conflicting information.

Otto indicated he was ready to repeal the breed-specific ban while perhaps considering some of the provisions on tethering while maintaining the city ordinances governing dangerous dogs and animal neglect issues.

Councilman Duane Urich, who’s also not on the administrative committee, stated that when the council several years ago enacted the ban on specific dog breeds, it was in his opinion, a “knee jerk reaction” to one incident. The other councilman listening to last nights’ discussion was Marvin Humphreys.

As has been stated before, it’s widely believed that many residents of Trenton have pit bulls or related breeds and nothing is being done to identify and remove them from the city limits. Councilman Urich called the current breed ban “unenforceable.”

A few visitors attended the committee meeting on Tuesday evening, one of them, Chuck Jones, stated the Green Hills Animal Shelter has several pit bulls housed there and that it can not allow a Trenton resident to adopt because of the current breed ban. Urich added the ordinance is prohibiting responsible pet owners from having any of the banned breeds. Others indicated a desire for all pet owners to be responsible for their animals but are unsure how to achieve that.

On another matter, City Administrator Ron Urton reported he’ll meet with the street superintendent to see what can be done to alleviate the traffic congestion along Oklahoma Avenue when the middle school dismisses students each afternoon.

A meeting with Trenton school officials also was suggested.

(Photo of Pit Bull by Michael Anfang on UnSplash)