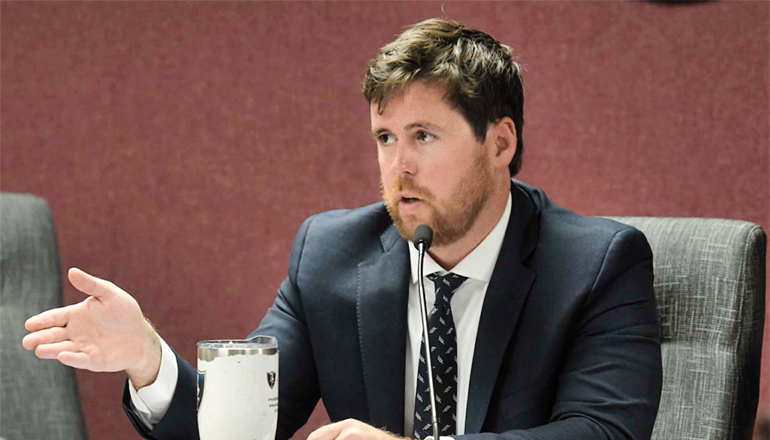 In a news release Tuesday, Fitzpatrick called for an emergency meeting of the Missouri State Employees Retirement System (MOSERS) Board of Trustees for votes to block future purchases of Russian securities and consider how to divest from existing holdings.

By law, Fitzpatrick is one of 11 members on the MOSERS Board. The next regular MOSERS board meeting is scheduled for April 22.

In a statement issued by his office, Fitzpatrick said MOSERS held $13 million in Russian securities in funds totaling more than $1 billion allocated to investments in global markets.

At the close of fiscal 2021, MOSERS had more than $13 billion in assets. The only identifiably Russian holdings in the fiscal 2021 financial report were $5 million in securities priced in Russian rubles and $116,587 in fixed-income assets.

“Vladimir Putin is a madman and it’s time for the world to cut him off,” Fitzpatrick said in a prepared statement. “In Missouri, that starts with MOSERS. When he is isolated and alone, Ukrainians and Russians will have their countries back. Missouri stands with the Ukrainian people.”

MOSERS did not respond to an inquiry on when or whether an emergency meeting will be held.

Since Russia invaded Ukraine on Feb. 24, several states have taken steps to eliminate their Russia-linked holdings.

The Kansas Public Employee Retirement System is considering how to divest itself of $36 million in Russian assets, the Topeka Capital-Journal reported.

The CalPERS fund is the largest public pension fund in the nation, with $485 billion in assets, with investments in publicly traded Russian companies totaling $900 million to $1.1 billion at any given time, fund spokeswoman Megan White told the Times.

Connecticut’s Treasurer Shawn Wooden is directing that state’s pension funds to sell Russian assets, Reuters reported. Funds in Georgia, Rhode Island, and Colorado, among others, are examining holdings to do the same, S&P Global reported.

In his news release, Fitzpatrick also called for other state pension funds “to follow suit in ensuring no public funds are used to help prop up the Russian economy as long as these atrocities continue.”

No one from any of those four systems responded to inquiries Tuesday morning from The Independent.

The MPERS fund held $3.1 billion in assets on June 30, the last day of fiscal 2021. Its annual report did not include any reference to Russian investments or assets priced in rubles.