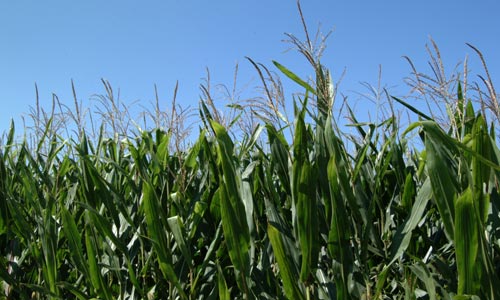 The use of in-season nitrogen on corn has increased in Missouri and surrounding states over the past 10 years. What used to be rare is now common. Some of these applications are planned, but others are to give corn yields a boost when wet weather causes nitrogen loss.

MU Extension nutrient management specialist John Lory agrees. “You can put nitrogen on remarkably late,” Lory said. “Late nitrogen, when needed, almost always pays and may not hurt yield as much as you think.”

Scharf and Lory belong to MU Extension research teams that have studied late-season nitrogen applications for decades. The results surprised them in terms of how well the corn responded. “What we thought would be too late for the corn turned out not to be,” Scharf said. “Machinery is more limiting than the biology of the plant. So if your plants need it, get going and figure out the machines.”

After the corn is knee-high, it begins rapid growth and needs more nitrogen. However, MU research shows that nitrogen application delayed until V12 to V16 rarely reduced yield potential.

The MU Certified Strip Trial Program will work with producers in northeastern and east-central Missouri who are interested in testing the use of satellite imagery to predict nitrogen need.

MU Extension’s Nitrogen Watch website, at this link tracks spring rainfall and identifies areas that are on track to have nitrogen deficiencies. It will be updated weekly until nitrogen loss slows in July.

The risk of in-season nitrogen loss varies based on rainfall and soil type. High-risk fields include those with soils high in clay, which are most at risk of nitrogen loss after heavy rain because clay hangs onto the water. This leads to denitrification in warm soil. Excessive rainfall puts sandy soils at high risk of nitrogen loss due to leaching. Leaching can also deplete nitrogen on well-drained loamy soils, but the risk is lower than in sandy soils.

When applying nitrogen fertilizer to standing corn, make sure you know how to best manage your fertilizer product, Lory said. Urea can be broadcast over corn with minimal damage to the plants. Treat urea with a nitrogen stabilization product like Agrotain if you are applying to corn less than 2 feet tall.

Be careful with urea-ammonium nitrate solutions, Lory added. Apply below the canopy to prevent burning plant leaves. Use dribble or banded applications to minimize contact with surface residues that can tie up applied nitrogen.

Ammonium nitrate can also burn plants if it is broadcast over the top of a corn crop. It should probably be avoided in corn that is more than 2 feet tall. For corn up to 2 feet tall, it is an excellent option.

Plan ahead for what machines are available to apply late-season nitrogen. Planes, high-clearance spinners, and high-clearance sprayers with large tanks are options. By early July, planes may be contracted for fungicide application. If fields remain wet, ground equipment may not be an option. Have a backup plan.

Profitability depends more on nitrogen deficiency levels than timing. In significantly nitrogen-deficient corn, rescue applications are likely to be profitable up to two weeks after silking, Lory said.