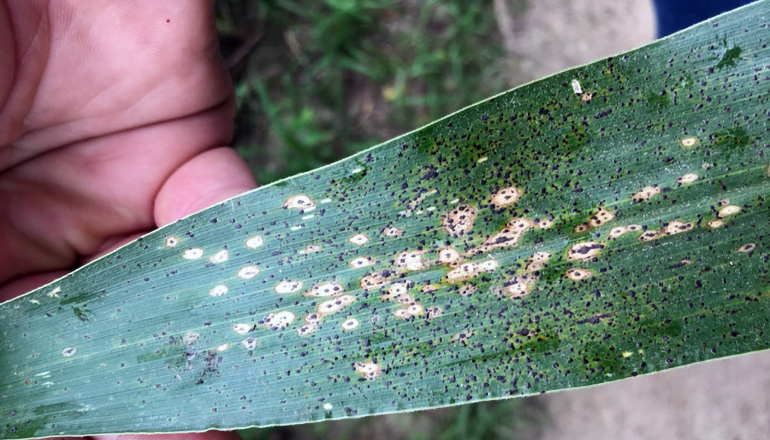 She identified tar spot in four far northeastern Missouri counties: Scotland, Lewis, and Clark in 2019 and Marion in 2020. She expects it to spread in the northern half of Missouri and then to the middle of the state.

Tar spot, caused by the fungal pathogen Phyllachora maydis, has spread to 10 states since it was first found in the U.S. in 2015. In 2018 it caused significant yield losses in Illinois, Indiana, Wisconsin, and Michigan.

Tar spot appears as circular or oval raised black dots (stromata) on both sides of leaves, the sheaths and husks, Bissonnette says. A brown or tan halo often surrounds the raised black spots. It can appear on brown and green tissue, alone or in numbers.

The tar spot pathogen can infect multiple times in a single season. It overwinters on soil surface residues and spreads by wind and heavy rain. Conditions that favor the pathogen include monthly average temperatures of 63 to 72 F, relatively high humidity greater than 75%, seven or more hours of leaf wetness at night, monthly rainfall of more than 5.9 inches, and 10-20 foggy days a month.

Few fungicides are labeled for tar spot management, but researchers are testing the effectiveness of many commercially available products. The Crop Protection Network has an efficacy comparison table based on trials conducted by land-grant university researchers.

For an interactive map showing the spread of tar spots, visit THIS LINK, or if you spot tar spot, contact Bissonnette at [email protected] or 573-882-9106.