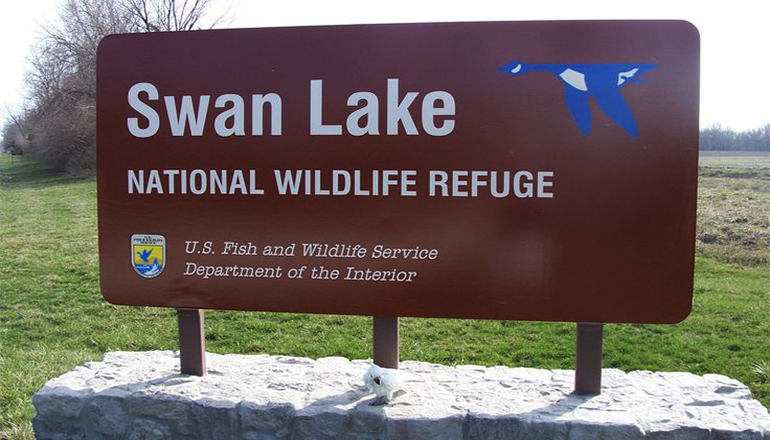 The gates at Swan Lake National Wildlife Refuge will once again open to the public on Saturday, March 3, 2018, at 6 AM.  The Refuge is closed annually from late October to the first Saturday of March to allow for undisturbed habitat for migrating and wintering waterfowl.

Once spring arrives the place becomes a Refuge for people as well as wildlife. Whether it’s fishing, bird watching, a relaxing drive or a hike through the woods, Swan Lake National Wildlife Refuge is a place for everyone to enjoy.  There is an abundance of outdoor public use opportunities at Swan Lake National Wildlife Refuge.  The 2,000 acre Silver Lake is open to fishing and the Auto Tour Route provides a relaxing drive.  There are also plenty of hiking opportunities available, as the entire refuge is open to foot traffic during this time.  Additionally, there is a nature trail by the Visitor Center with a nice overlook and scopes near the Swan Lake marsh.  The refuge is open to antler shed hunting, mushroom and berry picking for personal use.

Swan Lake will also be hosting events this summer to include the annual 8th Grade Outdoors Day on May 8th and our popular First Fridays at the refuge on June 1st, July 6th, and August 3rd.  The Refuge will also host a hunter education field Day on September 18th this fall.  Something new at Swan Lake this year will be an area of the refuge open to Dove hunting during the September Missouri Dove Season.  For the second year in a row, the refuge will host a hunter scout day for waterfowl hunters to scout the waterfowl hunting units.  The hunter scout day will be on Saturday, October 6th.

Swan Lake National Wildlife Refuge is located 1one mile south of Sumner, Missouri and managed by the U.S. Fish and Wildlife Service as a unit of the National Wildlife Refuge System. The U.S. Fish and Wildlife Service is the principal federal agency responsible for conserving, protecting and enhancing fish, wildlife and plants and their habitats for the continuing benefit of the American people.