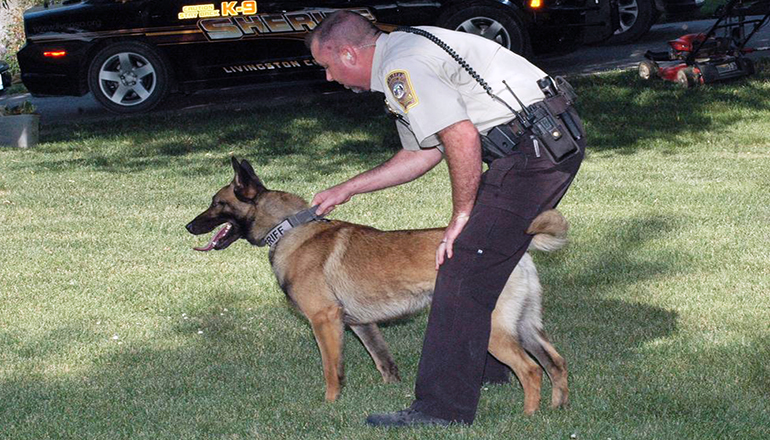 Livingston County Sheriff Steve Cox reports a fugitive on the run since January 28th surrendered Sunday after Deputy Leadbetter explained K-9 Zaki would search a home on Jennifer Lane in Chillicothe for the fugitive.

Officers initially announced their presence without any response from anyone in the home, but 36-year-old Jeffery Gordon Davenport of Chillicothe reportedly said he did not want to meet Zaki as the K-9 searched the home.

Officers also arrested 48-year-old Amy Nieman of Chillicothe for allegedly hindering prosecution with Cox noting she was hiding with Davenport.

Davenport allegedly ran from probation/parole officers last week and eluded other law enforcement during the search for him. Davenport has been charged with felony possession of a controlled substance except 35 grams or less of marijuana or synthetic cannabinoid and misdemeanor failure to appear in court. Bond on those charges is $10,500, and he is scheduled for the Associate Division of Livingston County Circuit Court March 11th.

Davenport was charged with misdemeanor non-support, and bond was set at $2,500 on a warrant for failure to appear on that charge. He is scheduled for the Associate Division of Circuit Court March 16th on that charge.

Nieman has been charged in the Associate Court with alleged failure to obey a judge’s order on an original felony charge of possession of methamphetamine. Bond was set at $10,000 on the warrant for failure to obey the judge, and she is scheduled for court March 11th.