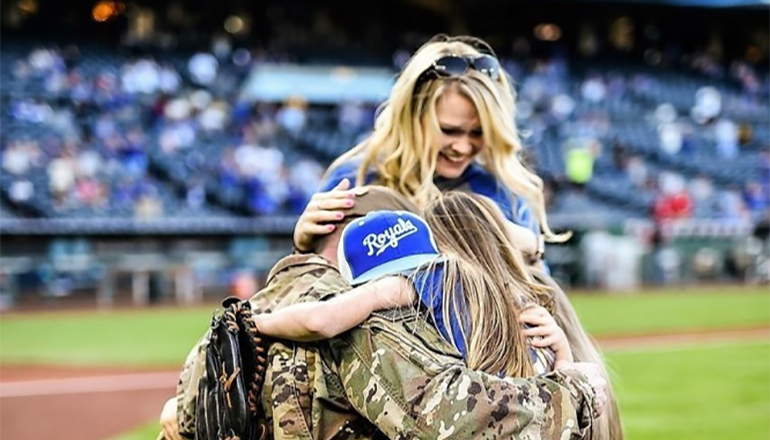 Escorted towards the pitcher’s mound, the Laffey family prepares to watch one of their own throw in the honorary first pitch for their favorite Major League Baseball team– the Kansas City Royals. Ty Laffey practiced for this moment for a week but knowing that his father was unable to be there due to being deployed dampened his excitement.

Before nine-year-old Ty could throw the pitch, the announcer directs his attention to the jumbotron, where a video of his dad begins to play. Tech. Sgt. Sean Laffey wishes Ty luck from an undisclosed location and wishes more that he could be there. As the video ends, Sgt. Laffey walks on the field, surprising his wife Brooke, sons Ty and Tatum and daughters Madison and Mayce. Racing and reaching towards him, the whole family finally embraces after three months. Tightly clutching his wife and kids with his arms outstretched to their limit, he still cannot completely wrap around each and every one of them.

“Ty probably took the deployment the hardest,” said Sean, an armament specialist assigned to the 442d Fighter Wing at Whiteman Air Force Base, Missouri. “It was really good for him to be able to have that opportunity,”  Ty said his room is decorated with Royals stuff and his dad attests that he knows almost every player, Alex Gordon, and Perez being his favorites. Ty isn’t just a fan either, he shyly admitted he pitches for his baseball team.  “I missed playing baseball with him,” said Ty about what he missed while his dad was gone. “I just missed him and a lot of things.”

Brooke said it wasn’t long after Sean arrived at Kandahar Airfield, Afghanistan, that she found out Ty was watching videos of military surprise homecomings. Unbeknownst to his family, Sean said he began planning his surprise for them around the same time.

Sean already had a contact with the Royals because he performed colors presentations with the Liberty Fire Department color guard, so typically an event manager would contact him and his team to come do a presentation on the field– this time he was asking a favor from them.  He remembers contacting Nicole, the Royal’s manager of event presentations, mid-February and was told the conversation would be tabled until April, the month of his arrival. He said he chose his wife’s birthday, April 27, as the day for the surprise. This date would also give him a little buffer in case his arrival date changed.

He ended up arriving at Whiteman with a group of 442d deployers on April 21, six days before his surprise. He said this also marked the first day of the hardest week he had experienced since he was away from home.

“That week I was home I had to FaceTime my wife and pretend I was still out of the country,” Sean said. “She would call and I would tell her to hang on a second and call her back after I threw my uniform on and got in an area where she couldn’t tell where I was. I did that in many random locations. I had to pull over on my way to base to in-process, thankfully I already had my uniform on so I FaceTimed her from some random building.”

He said he hid-out at his parents’ house, who live on the other side of town. He hid his truck and told his family to ignore his wife’s phone calls that way the secret didn’t accidentally slip. While Sean was hiding out, Brooke said that week was an abnormally busy week for the family.

“It was my week of finals and the kids were super busy,” Brooke said. “I think that week was harder on him to make that happen than me going through it.”  Brooke works full-time managing three cardiology clinics while pursuing her master’s in healthcare administration. The Laffeys have a 10-, 9-, 5- and 3-year-old with hobbies of their own as well. She was planning a surprise party for Sean at his sister’s house for the day after her birthday– the day he told her he would be home.  “His surprise was ten times better,” Brooke said. “Ty is still talking about it every day.”

Sean described the most vivid moment from his surprise was seeing Tatum, his 3-year-old son, lagging behind the rest of his family as they were running towards him. Tatum’s little legs were struggling to get him to his dad, but the rest of the family was too excited to notice.

“I remember him trying to get to me,” Sean said. “I don’t remember much else because I was so worked up in the moment. I meant to take-in what it felt like to see what the Royals saw in the dugout and the whole experience, but I was too worked up that I completely blocked everything out.”

While in Afghanistan, Sean had a flag flown for Nicole, the one who helped him coordinate the surprise on the Royal’s field. He put it in a case with a certificate signed by the commander of their mission.

Sean presented this token of appreciation to Nicole and told her how much that day meant to him and his family.  “I can’t thank you enough,” Sean said. “It was the most unforgettable experience for my family.”