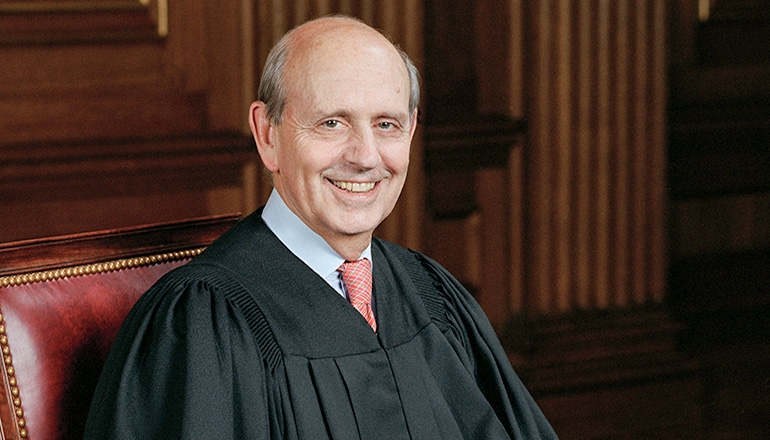 The decision by the 83-year-old justice, who was nominated by President Bill Clinton in 1994, would give President Joe Biden his first chance to nominate a member of the Supreme Court, though the evenly divided Senate could significantly affect that choice.

Some Republican senators, including members of the Senate Judiciary Committee who will vote on confirmation, on Wednesday already were indicating resistance to what they predicted would be an “activist” or “extremist” Biden nominee.

Biden, however, wasn’t ready to comment on the reports of Breyer’s retirement or to give a date for when he would nominate a replacement.

“There have been no announcements from Justice Breyer. Let him make whatever statement he’s going to make. And I’ll be happy to talk about it later,” Biden said.

Senate Majority Leader Charles Schumer lauded Breyer in a statement, calling him a “model jurist” who “embodies the best qualities and highest ideals of American justice.”

Schumer vowed that Biden’s nominee “will receive a prompt hearing in the Senate Judiciary Committee, and will be considered and confirmed by the full United States Senate with all deliberate speed.”

Judiciary Committee Chairman Dick Durbin, an Illinois Democrat, reinforced that timeline in a statement of his own, saying he looked forward to moving the nominee “expeditiously” through the process.

Durbin urged Biden to “nominate someone who will bring diversity, experience, and an evenhanded approach to the administration of justice.”

Biden pledged during a presidential primary debate in February 2020 to nominate a Black woman to the court — a potential history-making move.

“We talked about the Supreme Court. I’m looking forward to making sure there’s a Black woman on the Supreme Court, to make sure we in fact get every representation,” Biden said in response to a question about a personal motto, personal belief, or favorite quote that candidates believe represented them.

The No. 3 Senate Democrat, Washington state’s Patty Murray, backed that promise in a statement, saying “The Court should reflect the diversity of our country.” And the Congressional Black Caucus said in a statement that its members “look forward” to Biden’s “historic nomination of a Black woman to the Supreme Court.”

White House press secretary Jen Psaki said that Biden “stands by” his commitment to nominate a Black woman to the court.

So far, the president has nominated eight Black women to the 13 U.S. Courts of Appeals, and if they are all confirmed, it would double the number of Black women confirmed to federal appellate courts to 16.

While Biden has not released an official shortlist of picks for the Supreme Court, a list of possible contenders includes Georgia U.S. District Court Judge Leslie Abrams Gardner, who is 47, and the sister of Stacey Abrams, who is running for governor in Georgia.

Another potential nominee is D.C. U.S. District Court Judge Ketanji Brown Jackson, who is 51 and was confirmed by 50 Senate Democrats and three Republicans last year. Jackson was also on President Barack Obama’s shortlist for Supreme Court pick in 2016.

Psaki declined to answer several questions about the Supreme Court nomination process until a justice makes a retirement announcement but did say that “if that opportunity presents itself” for Biden to make the lifetime appointment, the “hope” would be that Democrats unify behind that person.

That may be necessary, given GOP senators’ comments.

South Carolina Republican Sen. Lindsey Graham seemed to indicate that his political party might not support Biden’s eventual nominee, even though that announcement is likely weeks away.

“If all Democrats hang together — which I expect they will — they have the power to replace Justice Breyer in 2022 without one Republican vote in support,” Graham tweeted. “Elections have consequences, and that is most evident when it comes to fulfilling vacancies on the Supreme Court.”

Sen. Rick Scott, a Florida Republican, and head of the National Republican Senatorial Committee made a similar statement.

“I predict that Chuck Schumer and whoever is running the White House will force all Democrats to obey and walk the plank in support of a radical liberal with extremist views,” he said.

Tennessee Republican Marsha Blackburn, who is a member of the Senate Judiciary Committee, previewed a potentially antagonistic Republican position on any Biden nominee, citing the president’s low poll numbers.

“He has proven incapable of serving as Commander in Chief,” Blackburn said. “I will not stand by as President Biden attempts to fill our courts with activist judges who are beholden to progressive interests. I look forward to thoroughly vetting the nominee to see if they are a person of high character who will strictly interpret the Constitution and not make law from the bench.”

A spokeswoman for the court did not return a message seeking confirmation of Breyer’s retirement Wednesday.

Virginia Democrat Tim Kaine praised Breyer in a statement and said he would work with other senators and the White House to confirm a replacement.

“I look forward to working with my colleagues and with President Biden to confirm a qualified nominee to succeed Justice Breyer,” he said. “It is critical that any Supreme Court Justice meets fundamental tests of honesty, integrity, and expertise.”