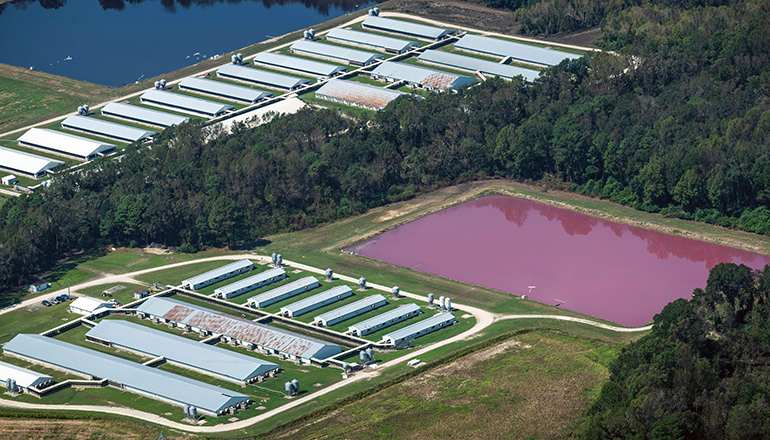 (Missouri Independent) – On July 19th, I had the opportunity to testify to a Congressional committee about the challenges and opportunities facing family farmers like me. Below is a slightly condensed version of what I said.

I’m Doug Doughty. We grow corn, soybeans, and hay along with a cow/calf operation in north Missouri.

I returned to our farm during the 1980s farm crisis. Little did I know, another crisis was unfolding and is continuing to gain strength today — the proliferation of large-scale, industrial concentrated animal feeding operations (CAFOs).

From where I stand in my 38 years of farming: Industrial agriculture nutrient pollution (such as nitrogen and phosphorus) is increasing due to runoff and leaching of animal manure and fertilizer from fields, and CAFOs are escalating, both posing environmental threats to rural communities, our urban neighbors, and even the Gulf of Mexico.

The sophisticated CAFO industry is highly dependent on cheap feed and avoiding environmental regulations — pushing farmers, animals, and the earth to their limits.  Recent state assessments show a laundry list of waterbodies impaired with bacteria, nitrates, and phosphates.

We raise cattle. I grew up raising hogs. I understand what is involved in raising animals for food.

But what corporations do is different than what we do on our farm. Buildings the size of football fields concentrate thousands or tens of thousands of animals and create massive amounts of manure, in quantities equivalent to cities — a challenge to be handled responsibly, putting surface and groundwater at risk of contamination.

We need more effective CAFO regulations to counter this massive environmental impact. It’s past time to regulate their waste and air pollution. Let’s bring nitrogen and phosphorus inputs in line with crop needs, an easy way to improve water quality.  Let’s stop over-applying manure and fertilizer—less excess to wash away. In 2016, EPA identified phosphate and nitrogen farm runoff as a serious threat to the public’s health.

In 1997, my county enacted a local health ordinance to govern CAFOs. The ordinance did not ban CAFOs but was stronger than state regulations. But 20 Missouri health ordinances fell victim to intense lobbying from corporate agriculture in 2019, another domino to fall in a series of laws to deregulate the industry.

We were taking a reasonable approach, but the attack on “local control” takes that tool away. And our state government, commandeered by corporate agriculture, has eroded state protections and regulations on CAFOs to near the EPA baseline. Weakening state rules are described as “coming in line with federal regulations.”

Shortly after, we resisted a 10,500 head industrial sow CAFO proposed near the 6,000-acre Poosey Conservation Area.  We knew the impact it would have on the neighborhood dealing with air and water pollution, health issues, flies, noise, and truck traffic. Plus, the burden on our deteriorating highways and county roads. And finally, the potential harm to the conservation area, an important public land/natural resource destination for recreation. This was not opportunity knocking.

This CAFO was going to produce feeder pigs for JBS — the Brazilian multinational and largest meatpacker in the world.  How would JBS be held accountable? Other Missouri communities deal with pollution issues from industrial CAFOs run by China-owned Smithfield.  China and Brazil get the pork, and we get the manure and environmental issues.

The permit was withdrawn, for now. But Missouri is determined to provide minimal protections.  Recently, our DNR removed “perched water table” from the definition of groundwater.  Shallow groundwater had been discovered on the aforementioned proposed CAFO site.  Often, perched groundwater is our ONLY source of groundwater that is reasonably available. Curiously, the definition change applies to CAFOs, not other industries, such as landfills and mines.

Federal regulations of CAFOs are weak. The EPA doesn’t have regulations in place to protect us from CAFOs, nor the political will to improve them. But EPA is our last line of defense.

Let’s fund resourceful farming and food initiatives that contribute to the public good.

Doug Doughty is a grain and livestock farmer from Livingston County.