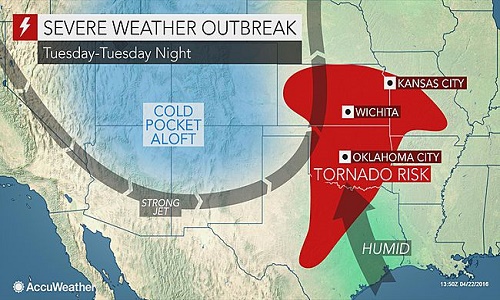 (AccuWeather.com) – There is the potential for a damaging and dangerous severe weather outbreak to unfold next Tuesday and continue into Wednesday over part of the central United States.

Families, individuals and emergency managers should review severe weather safety plans at this time. The pattern unfolding warrants communities to be prepared ahead of the situation.

“All modes of severe weather are likely, including tornadoes, large hail and damaging winds,” according to AccuWeather Assistant Director of Storm Warning Services Andrew Gagnon.

“Of the two days, Tuesday has the greatest potential to produce numerous tornadoes, including some strong [wedge] tornadoes that could be on the ground for an extended period of time,” Gagnon said.

At this time, the area at greatest risk for violent storms on Tuesday is forecast to extend from central Texas to a large part of Oklahoma, Kansas and Missouri. However, the area could change somewhat, depending on the track of a storm that will move out of the Rockies on Monday night.

The severe weather threat zone will migrate eastward on Wednesday.

“Storms on Wednesday will focus over the middle part of the Mississippi Valley,” Gagnon said. “The event on Wednesday is likely to transition from isolated tornadoes at first to more of a strong wind gust event.”

Storms on Wednesday may also extend into part of northeastern Texas.

As with any severe thunderstorm, frequent cloud-to-ground lightning strikes can occur, along with flash flooding. The risk of flash flooding will be greatest, but not limited to areas that have been hit with heavy rainfall in the past week or so.

Later next week, locally severe storms may extend from parts of the central Appalachians to the lower Mississippi Valley.

By the end of next week, a new storm will begin to move out of the Rockies and could initialize another round of severe weather over portions of the Plains, which may then expand across the Mississippi, Ohio and Tennessee valleys by the start of May.

Prior to the main outbreak(s) of severe weather next week, severe storms will impact areas from Oklahoma to Iowa from Sunday afternoon to early Monday.