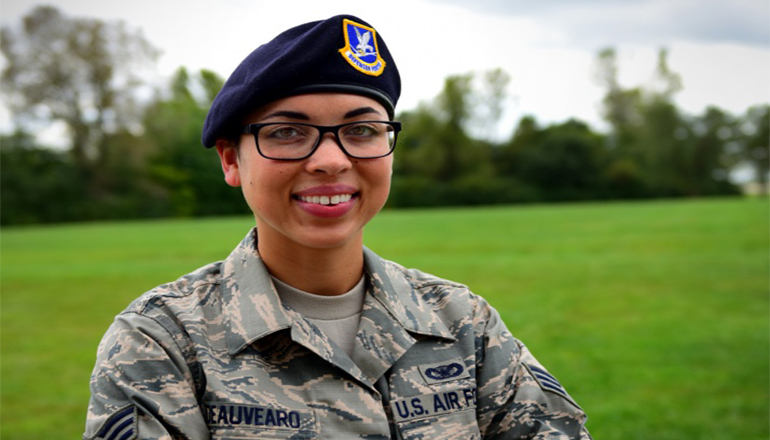 Amid lockers lined with an arsenal of weapons, within its own fortress, U.S. Air Force Senior Airman Jasmine Deauvearo, a 509th Security Forces Squadron (SFS) armorer, begins her 12-hour shift securing and maintaining various types of armaments alongside her fellow Airmen at Whiteman Air Force Base (AFB), Missouri.

Always striving for excellence, she focused her efforts outside of her primary duties and dedicated her spare time to career advancement: something she developed by taking online courses.

One class here, two there. Three years later and Deauvearo now has two semesters remaining for her degree.

“I’ve been pursuing my degree in healthcare administration,” said Deauvearo. “It’s something that is really interesting to me.”

Once she attained the applicant information guide, she began preparing everything necessary to apply to the Medical Service Corps (MSC), all while studying for the staff sergeant promotion test – for which she later found out she was selected.

“MSC’s have a lot on their plate, but I believe I will really enjoy it,” she added. “It will definitely be a challenge!”

After the board convened in August to review the MSC application packages submitted, Deauvearo would be notified by Lt. Col. Justin Secrest, the 509th SFS commander, in less than a month of the results: There were 75 personnel selected – and she was one of them.

“Senior Airman Deauvearo is a perfect example of how hard work and dedication can produce great opportunities,” remarked Secrest. “While working 12-hour shifts and maintaining outstanding proficiency as a defender, she was able to complete her education and all the requirements – and there were many – in order to compete for this opportunity. As the saying goes, ‘Dreams don’t work unless you do,’ and Jasmine worked VERY hard.

“We are very happy for her and look forward to hearing about all the continued great things she will do!” added Secrest. “I hope her example leads others to the same opportunities.”

During this stressful time, where there was much to achieve in a short period, Deauvearo said she kept in contact with mentors to make sure she was on the right track. As her goals mirrored her mother’s, she sought her counsel first.

“I want Jasmine to be better than I was starting off and pass me by grade and rank in the future and be the best that she can be,” said U.S. Army Maj. Darla Deauvearo, adjudicator for the physical evaluations board. “I want her to set her own goals and have a plan to accomplish those goals.”

Maj. Deauvearo enlisted in the Army and served for 12 years active duty before she commissioned. When asked for guidance from her daughter, Maj. Deauvearo mentored her middle child to forego commissioning through the Air Force ROTC program first as she would gain a level of respect and perspective she would not have otherwise by enlisting.

“She has demonstrated outstanding performance and phenomenal leadership in all she does,” acclaimed Maj. Deauvearo. “She is always volunteering and setting the example for all to emulate.”

In retrospect, Senior Airman Deauvearo said her current path was not her original plan – although she first considered joining the military by commissioning, she ultimately heeded her mother’s words and forewent this option.

Looking back, Senior Airman Deauvearo said she is thankful for her decision to enlist first. She has viewed both ends of the spectrum and now has a better knowledge of how the Air Force operates.

“I will never forget where I came from,” said Senior Airman Deauvearo. “In order to be a great leader, you have to know how to follow first.”

As a squadron armorer, she is responsible for advising hundreds of Airmen who may have inquiries when they check out their weapons.

Through her enhanced ease in communicating with others combined with the long days at work, she said she is more equipped for what her future days may involve.

After shadowing at the clinic here at Whiteman, she said she is certain of her choice to join their ranks.

“I was able to see what I was getting into first hand,” said Senior Airman Deauvearo. “I received a better perspective rather than just reading about it online. The more I saw, the more motivated I became.

“If you want something, you just have to put your mind to it and achieve it,” added Senior Airman Deauvearo. “Don’t doubt yourself!”

Senior Airman Deauvearo said she hopes to better serve the Air Force with her degree. In her new role, she hopes to lead and mentor Airmen in the ever-expanding career field.

“I applied to the Medical Service Corps because I’ve always had a passion, or dream, to work in the medical field,” remarked Senior Airman Deauvearo. “The vast knowledge and opportunities are endless.”

With the support she received from her family, friends, and while shadowing many members of the medical group here at Whiteman, to include Capt. Simon Ng and 1st Lt. Jason Pigg, both healthcare administrators assigned to the 509th Medical Group, she is eager to serve in the Medical Service Corps.

Senior Airman Deauvearo found motivation from those close and afar throughout the application process.

“My mother has always told me that she wants me to be better than she has,” she added. “She wants the opportunity to commission me while active duty and now she can!”

The staff sergeant-select is on track to earn her degree in healthcare management in spring 2018 from Waldorf University. Following her graduation, she is scheduled to attend Commissioned Officer Training course at Maxwell AFB, Alabama. Following the course, she will receive her new base assignment, where she will train at until she returns to Texas to attend her six-week-long health service administration course at Joint-Base San Antonio.

During the course of her Air Force career, Senior Airman Deauvearo said the key to success has been self-motivation.

“No one is going to take care of your career better than yourself,” said Senior Airman Deauvearo. “It’s your journey – show people you want it and make the right steps to achieve your goal. Never give up and keep pushing forward.”