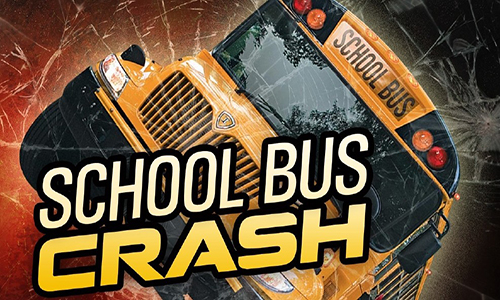 Trenton Police report the collision of a school bus and a car at 18th and Cedar Street resulted in citations issued to both drivers. The accident happened last Thursday morning on March 18, 2021, at 7:30 am.

The Apple bus company vehicle was eastbound on 18th Street while the car was headed south on Cedar Street when the collision occurred.  A report listed the bus driver as 68-year-old Preston Clyde Ramsey of Jamesport while 32-year-old Angela Elizabeth Lovell of Trenton drove the car.

The report indicates a school bus passenger, ten-year-old Kayden Michael Knapp of rural Trenton, received a knee injury due to the crash. The youth reportedly complained of knee pain at school, but there was no visible injury. No injuries were noted for two other bus passengers. Another bus had come to the scene to take the students to school, which occurred before an officers’ arrival. Two children who were passengers in the Lovell car also were not hurt.

Police listed damages as minor to the bus’s front bumper and moderate to the passenger side doors and rear of the car.

Police issued a citation to Ramsey accusing him of failure to yield at a stop intersection resulting in an accident. Lovell received a citation alleging her of failing to show financial responsibility at the time of the crash. Police noted it was a few minutes later when Lovell electronically provided proof of insurance to the department.