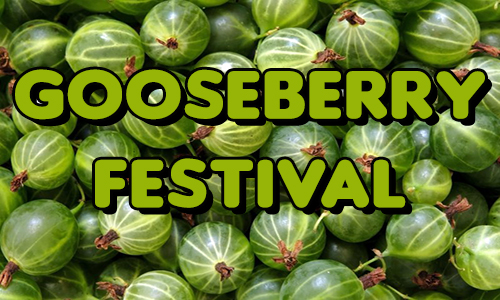 Many events will be held as part of the Gooseberry Festival in Trenton this weekend.

The Gooseberry Cooking Contest will be in the Rock Barn Saturday morning with registration at 9 o’clock, and judging begins at 9:30.

Nick McHargue says the contest will include pies, jams, and jellies with gooseberry flavoring, and prizes will be awarded.

An auction will also be in the Rock Barn Saturday morning starting at 9 o’clock.

A crappie and bass tournament will be held at the American Sportsman Road and Gun Store on East 10th Street.

Preregistration starts at 8 o’clock, and it costs $30 per team.

McHargue says the bass and crappie caught will be weighed, and prizes will be awarded.

A barrel race will be at the North Missouri Saddle Club on East 28th Street at 10 o’clock Saturday morning. Preregistration for the race is required.

A horseshoe pitching contest will be held as part of the activities during the Gooseberry Festival in Trenton.

The contest will be at Eastside Park Saturday morning with registration at 9:30, and the contest begins at 10 o’clock.

A frisbee golf tournament will be held as part of the Gooseberry Festival in Trenton Saturday morning.

Registration will begin at 8 o’clock, and tee off is at 9 o’clock.

Tyler Busick is in charge of the tournament and says there will be a beginners division and an advanced division, and each one will have cash prizes for the winners.

The first place winner in the beginners’ divisions will receive $50, second $30, and third $20.

Busick says there will be one round for the beginners and two rounds for advanced.

He explains that frisbee golf uses the same concept as regular golf, except it uses discs and baskets.

Busick adds that drivers and midranges will come with registration.

There will be an atlatl throw contest as well as the Mean Bean Bag Tournament held during the Gooseberry Festival in Trenton.

Barb Spencer with the Green Hills Women’s Shelter is involved with both events June 17th.

The atlatl throw will be held near the Rock Barn at 9:30 that morning.

Spencer describes atlatl throwing as a sport which occurred just after throwing rock and sticks. She says an atlatl is a stick about two feet long and works as if an individual’s arm is extended, which gives power behind the dart or spear to hurdle it through the air to hopefully hit a target.

Spencer encourages individuals of all ages to try out the sport.

Registration for the bean bag tournament will be held at Black Silo Winery starting June 17th at noon, and competition begins at 2 o’clock.

Spencer adds that there will be a concession stand serving barbecue pulled pork sandwiches, drinks, cookies, and drinks.

The Grundy County Health Department will sponsor a 5K/10K walk-run on Saturday.  Registration begins at 7:00 am and the Walk begins at 7:30 am.  You may register for the event by clicking HERE.

All proceeds from the Mean Bean Bag Tournament will go to the Green Hill Women’s Shelter.