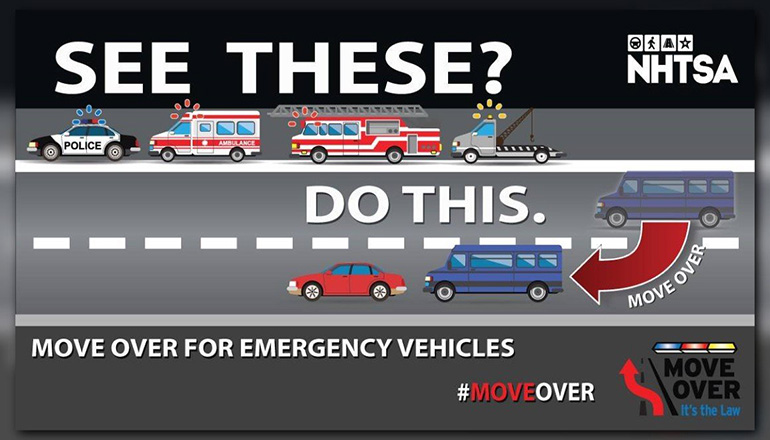 Saturday, October 16, 2021, has been designated National Move Over Day to remind drivers to help protect emergency personnel working on the side of the road. In 2020, three people were killed and 51 injured in the 231 traffic crashes involving parked emergency vehicles displaying emergency lights. Preliminary statistics indicate there have been 168 traffic crashes resulting in one person being killed and 46 injured thus far in 2021.

Missouri’s law directs motorists to proceed with caution and yield the right-of-way when possible upon approaching a stationary vehicle displaying lighted red or red and blue lights, or a stationary vehicle displaying lighted amber or amber and white lights. Drivers should change lanes away from the stationary vehicle if the roadway has at least two lanes traveling in the same direction. When changing lanes is not possible, motorists are directed to reduce their speed, while maintaining a safe speed for road conditions, when traveling past these vehicles.

Troopers and our traffic safety partners are called to serve and protect. When they are helping a stranded motorist, stopping someone for a traffic violation, or working a traffic crash, please protect them. Throughout the history of the Patrol, nine members have been killed after being struck by a vehicle while making a traffic stop or investigating a traffic crash. Together, we can prevent history from repeating itself. When you see an emergency vehicle displaying lighted red or red and blue lights, proceed with caution and yield the right-of-way. Move into a lane not adjacent to that of the stationary emergency vehicle or reduce the speed of your vehicle.