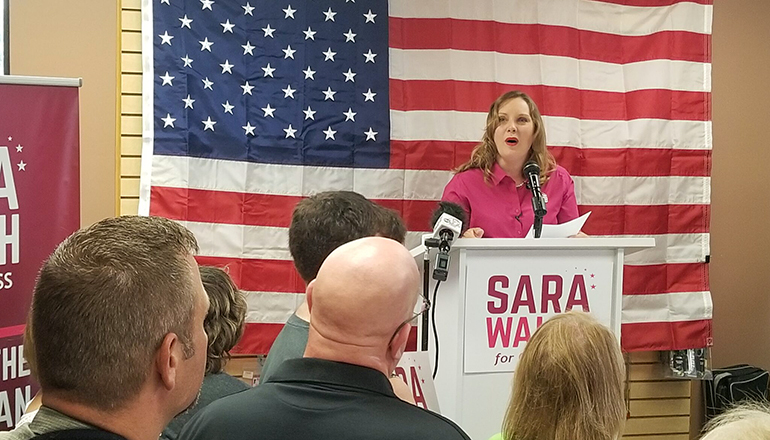 (Missouri Independent) – A crowded Republican primary is emerging in Missouri’s 4th Congressional District, a solidly GOP seat that is also the only one of the state’s eight districts certain to have a new lawmaker at the end of 2022.

State Rep. Sara Walsh, R-Ashland, on Wednesday became the latest candidate to enter the race to replace U.S. Rep. Vicky Hartzler, who is running for U.S. Senate. At a campaign kickoff in Columbia attended by more than 80 supporters, Walsh said her life story, going from poverty to the legislature, and hard work would help her prevail in August 2022.

As a girl, she said, “I learned to keep my dreams big and my debts small.”

Other potential candidates include state Sens. Denny Hoskins of Warrensburg, Rick Brattin of Harrisonville and Sandy Crawford of Buffalo, and Caleb Jones of Columbia. Missouri Scout, a subscriber news service, reported this week that Saundra McDowell, the GOP’s 2018 nominee for auditor, is also considering the race, while Daniel Hartman, state director for U.S. Sen. Josh Hawley, has decided against it.

No prominent Democrat has surfaced to run in the 24-county district that stretches from Audrain County in northeast Missouri to the Kansas border. Since it was drawn to its current boundaries in 2012, Hartzler has won five re-election campaigns with an average of 65.7 percent of the vote, winning every county in every election except the most populous, Boone County in central Missouri.

In her speech to supporters Wednesday, Walsh said she is running to protect the “American Dream.”

It represents the aspirations of Americans for a better life for themselves and their families, she said.

“But now, this idea, this promise, this truth, is under attack,” Walsh said, identifying socialists,

Liberals, Democrats, and “career politicians” as the enemy.

Speaking to reporters after her announcement, Walsh refused to answer whether she thought President Joe Biden won the 2020 election legitimately. Hartzler voted against certifying the electoral college vote when the House met after the Jan. 6 insurrection in Washington D.C. Asked if it was important for voters to know her views, Walsh said: “What is important for the people of the 4th District to know is that hard work is amazing and you can achieve your dreams here in America through hard work, faith in God and reliance on hard work.”

Walsh won her first election in 2017, taking a special election in the 50th Missouri House District. Walsh has been a member of the Republican State Committee since 2013. Walsh was a volunteer on Hartzler’s 2010 campaign and is married to Steve Walsh, Hartzler’s press secretary.

She’s hired veteran Republican consultant John Hancock for her campaign. Her years on the state committee make her known to Republicans across the state, he said.

“Sara has given so much of her time and effort working for others, that which goes around comes around,” Hancock said.

Burks, who was Boone County Clerk from 2017 until the end of 2018, issued a news release Tuesday afternoon naming the date for his campaign kickoff. Burks

Burks is an officer in the U.S. Navy Reserve and was stationed in Kuwait supporting military logistics during the Iraq War. Votes from active-duty military and veterans are a huge bloc in the district, which is home to both Whiteman Air Force Base and Fort Leonard Wood.

“As a servicemember from fifth-generation Missouri farm family, his voice in Congress will be their voice,” the release stated.

In the release, he said he would limit himself to no more than 10 years in the House.

“Too many politicians see politics as a career and worry more about clinging to their seats for decades than serving the people who elected them,” Burks campaign said.

Emery was the first to enter the race after Hartzler announced she would run for Senate.

“It is not ambition that drives me but what I see as the clear abandonment at the federal level of Biblical principles, national heritage, common sense, and the values that have made America great,” Emery said in the Facebook post announcing his campaign.

Johnson is in his first office, winning a narrow primary victory over an incumbent in August 2020. Johnson is a registered lobbyist for several conservative organizations.

“The seat needs strong, uncompromising conservative leadership and proven active-duty military experience,” Johnson said in a news release when he entered the race.

The statement from Rowden on Wednesday gave a nod to Walsh as “a friend” but said the seat needs someone who will confront President Joe Biden.

“We have to take back the House and restore sanity to Washington,” Rowden said. “It is important that we nominate a battle-tested conservative who will ensure this seat stays in Republican hands.”