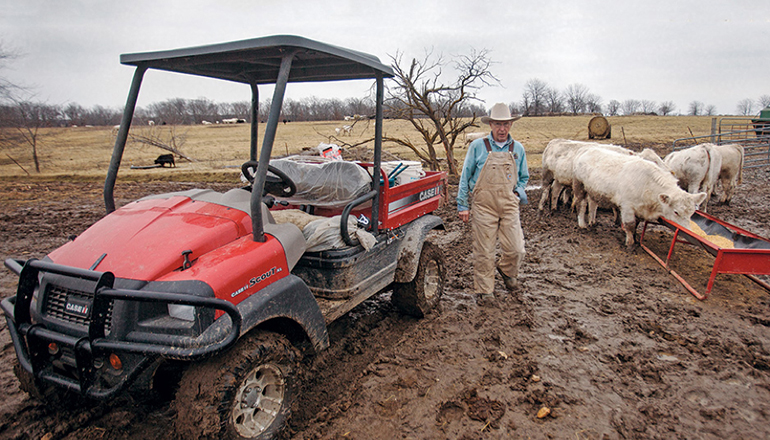 Ricketts retired as coordinator of the MU Extension Commercial Agriculture program in 2013 after 42 years of service. “His ability and energetic efforts to analyze a situation and outline constructive programs have contributed much to Missouri agriculture,” says Zac Erwin, MU Extension field specialist in livestock and one of the organizers of the symposium.

While Ricketts’ specialty is dairy, he has worked extensively with swine, beef and agronomy educators and industry leaders across the state and nation, Erwin says. “Livestock teams that he organized at MU exemplify Ricketts’ focus on the land-grant mission of giving instruction and practical demonstrations of existing or improved practices or technologies in agriculture.”

“Ricketts’ multidisciplinary collaborations at MU continue to be emulated by other universities that want to move faculty from the narrow focus of their individual disciplines to a more integrated, holistic, perspective of agriculture. These teams developed products that continue to be used in agriculture today,” Erwin says.

Ricketts grew up on 160-acre farm with a registered Jersey dairy herd at Fair Grove, Mo. During high school, he and his brothers showed many prize-winning cattle at fairs. He earned a bachelor’s degree in agriculture in 1963, a master’s degree in 1964 and a doctorate in dairy husbandry in 1970 from MU.

In college, he was president of the ag and student dairy clubs. The MU College of Agriculture named him the 1962-63 Outstanding Senior. He was a member of numerous honor societies and earned High Individual Award as part of Mizzou’s Dairy Judging Team at an international contest in 1961.

While chair of dairy science at MU, Ricketts led the Missouri Dairymen’s Institute, the All Breeds Show and Sale, and Dairy Day programs. He strongly promoted the state Dairy Herd Improvement Association program and the Missouri Livestock and Poultry Health Council. He revamped the management and cropping system at MU’s Foremost Dairy Research Center to increase feed and milk production and improve labor efficiency. He worked closely with state breed and dairy products organizations as well as 4-H and FFA.

The Missouri Dairy Hall of Honors bestowed its Dairy Leadership Award to him in 1993.

He lives in Hallsville with his wife, Sondra, who holds a bachelor’s in education from MU and is retired after 28 years as a librarian. They have three children, who were active in 4-H, and six grandchildren. All are Mizzou graduates.

Their son, Chad, was the first graduate of the MU food engineering program. He owns and runs his own food engineering company in Tulsa, Okla. Daughter Trina is an attorney shareholder with Ogletree, Deakins, Nash, Smoak & Stewart P.C. in Kansas City, Mo. Neysa, their youngest, farms with her husband in Lawrence County and is a senior oncology specialist for Amgen.