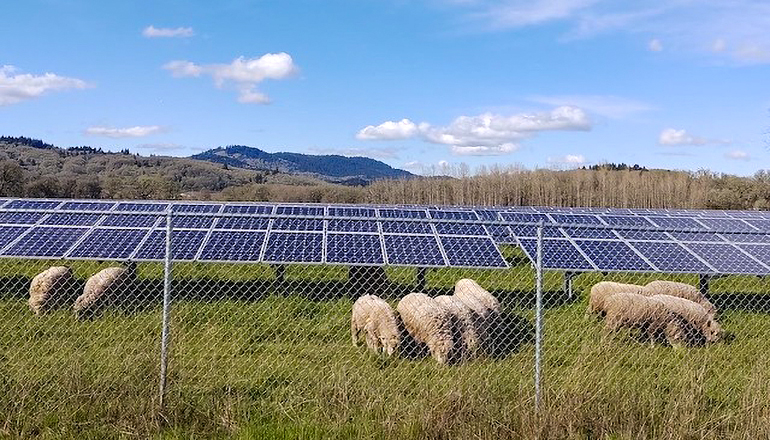 If a small fraction of farms captured solar energy, it could produce a large slice of the country’s energy needs, and boost farmers’ bottom lines.

New research from Oregon State University finds 1% of farmland in the U.S. could provide 20% of the country’s electricity needs through solar power. Co-author of the paper Chad Higgins, associate professor of Agricultural Sciences at the university, said farmers could treat sunlight as a resource in the same way they treat water or soil health.

“Most plants don’t need the full amount of sunlight that comes to the land, and a fraction of that can be productively harvested and made into electricity with solar panels,” Higgins said.

According to the research, the U.S. would need to invest less than 1% of its annual budget in order to achieve this, and it would create more than 100,000 jobs in rural communities. Higgins said the cooling effect from plants also would make solar panels more efficient.

Higgins is bringing this research to life on a farm in Aurora, about 20 miles south of Portland. He said most experiments on developing solar energy and agriculture side-by-side focus on the solar part, and farming is then shoehorned in.  “None of those systems were amenable to large-scale production agriculture,” he said. “There wasn’t really thought given to how do you get the tractors through, how you get the harvesters through, how you make sure there’s radius enough to turn the tractors around.”

In Aurora, Higgins said, he’s taking the opposite approach, permitting and investing in the project like a farmer would.

He said leasing land out for solar projects can boost income for landowners and farm operators and also give them a steady and guaranteed income. He said farmers are a crucial part of our energy future.  “Essentially what it does is, it makes farmers the energy barons of the future,” Higgins said.