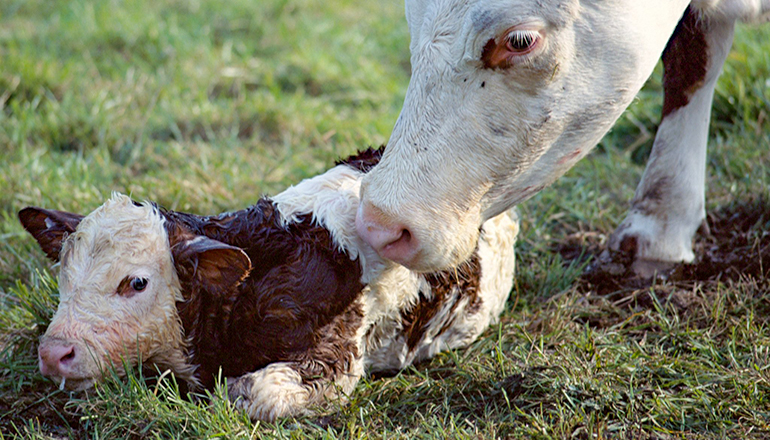 Cows need to conceive and calve early to earn their keep.  University of Missouri Extension beef cow-calf specialist Jordan Thomas says managing for a short or even an “ultra-short” calving season should determine which cows get to stay on the farm. Late-conceiving cows should go to market.

Thomas and MU Extension beef nutrition specialist Eric Bailey are collaborating on a multi-year project to carry out an ultra-short calving season at MU’s Southwest Research Center with the goal of managing for a calving season of only about 30 days. Thomas and Bailey argue that this can be done profitably through good reproductive management and strategic marketing of late-conceiving cows.

Cows that conceive late in the breeding season go on to calve late in the calving season. As a result, they wean younger, lighter-weight calves, Thomas says. Yet those cows cost just about the same amount to maintain all year long on the operation. Those costs really matter, especially when forage is in short supply, he says. Carrying low-productivity cows, especially through the winter months when feed costs are highest, drags down profits.

When deciding if cows stay or go, begin by calculating the carrying capacity of the farm or ranch. Matching the carrying stocking rate with carrying capacity is essential if the goal is to maintain cows through the winter with lower supplementation or hay costs, says Thomas. Knowing the number of animal units that the land can support via grazing alone helps producers decide whether to destock or buy feed. MU Extension agronomists and livestock specialists can help producers estimate land’s carrying capacity if needed.

“Most of us are used to thinking about destocking cows in drought conditions,” Thomas says. “We carry low-productivity cows until we run out of feed. But really, we need to ask if something else is more profitable. Those cows are eating up a forage resource that we could use in a much more profitable way.”

Beef up your forage management skills

Bailey argues that the spring flush of forage is a much more valuable resource than we realize. All too often in Missouri, that forage simply gets harvested as hay—and often as low-quality hay because spring weather prevented a timely hay harvest. Thomas says long hay-feeding seasons and long calving seasons seem to go together, and both lead to lower profits.

“Grass sells a lot better wrapped in calf hide than in cowhide,” Thomas says. “We need to allocate forage to profitable enterprises. If you consider the poor profits produced by later-conceiving, lower-productivity cows, it is clear they are not a good strategy for packaging that forage into calf value.”

The USDA’s most recent National Animal Health Monitoring Survey shows that producers give a variety of reasons for culling. Old cows or those with bad teeth go first. Other top reasons include pregnancy status, temperament, and drought. Those are good reasons to cull cows, Thomas says, but that doesn’t mean obvious culls are the only cows that need to be marketed. “Late-conceiving cows just are not going to generate enough profit compared to early-conceiving cows or stockers,” he says.

Data shows early calvers stay in the herd longer. Thomas supports a relatively short, well-managed breeding season but emphasizes the value of having a veterinarian perform a pregnancy examination to determine fetal age. Cows that conceived late will not only wean lighter-weight calves next year, they are also more likely to not become pregnant in the following year’s breeding season.

Thomas says producers can think of their herds as an investment portfolio. Consider the input costs and the equity tied up in a cow and ask if that cow generates an acceptable return on investment. A hidden cost of cow-calf production is cow depreciation or the decline in a cow’s value from one year to the next. By strategically marketing later-conceiving cows, Thomas says, producers can help control some of that cost.

“Although it can feel like a failure when we have to cull cows, we shouldn’t look at strategically marketing late-conceiving cows as failing,” Thomas says. “Look at it as an opportunity to free up equity that is tied up in animals that are poor investments. That is always a wise decision, especially when approaching the winter months without enough stockpiled forage. Late-conceiving females are just not a good investment.”