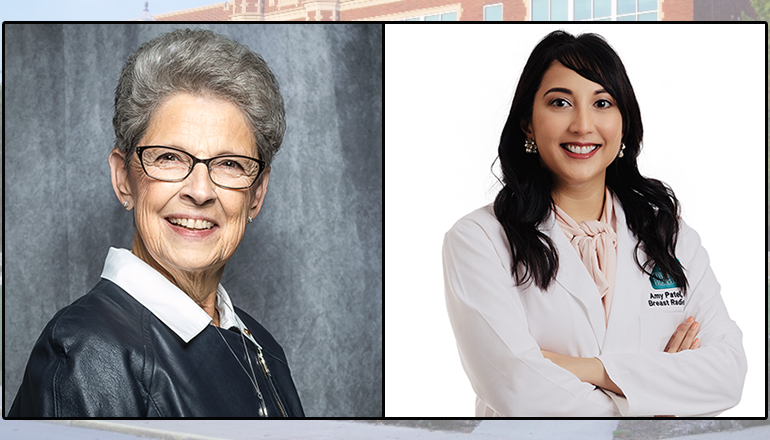 Foundation Board Member and Distinguished Alumna Phyllis Jackson of Trenton, MO, and Dr. Amy Patel, Medical Director of The Breast Care Center at Liberty Hospital and Assistant Professor of Radiology at the University of Missouri-Kansas City School of Medicine, will give the commencement addresses at North Central Missouri College in Trenton, Missouri, on May 7, 2022. Alumna Jackson will speak at the 9:00 a.m. morning ceremony, and Dr. Patel will be the 1:00 p.m. afternoon speaker. Both ceremonies will occur at the Ketcham Community Center on the NCMC campus near downtown Trenton.

Phyllis Jackson is a graduate of Trenton High School and Trenton Junior College (now North Central Missouri College). After completing her degree at TJC, Phyllis went to Northwest Missouri State University and received her Bachelor of Science in Secondary Education in English with a minor in music. She then took graduate courses through Webster University and the University of Missouri-Kansas City.

Ms. Jackson was a secondary school educator at various schools in Missouri and Iowa. She then became the founder and Chief Executive Officer of PDQ Cleaning Services, Inc., where she recently retired in 2021.

Phyllis is a long-time member of the North Central Missouri College Foundation Board and a current member of the scholarship committee and investment committee. Phyllis co-chaired the NCMC Foundation Capital Campaign for the development of the Barton Farm Campus. She was named a TJC/NCMC Distinguished Alumni for the class of 2004.

Phyllis is an active member of the community and holds several leadership roles. She has been an adult Sunday School teacher at Hodge Presbyterian Church for over 30 years and holds Elder and Deacon titles. She is a thirty-six-year member of P.E.O Sisterhood, Chapter MN of Trenton, MO, a local officer, Missouri State P.E.O. project chairman, and on the Program for Continuing Education Scholarship committee.

Phyllis was an appointed founding member of the Families and Friends of the Developmentally Disabled and instrumental for Senate Bill 40 Board of Grundy County, Missouri. She is a current member and officer of the Sunnyview Nursing Home Foundation Board. She also has a Grundy County Century farm, Martin’s Merry Maids, generationally held in ownership by female members of the Viola Martin Elliott Davis family.

Dr. Amy K. Patel is a Board-Certified Radiologist who specializes in Breast Imaging. She is a Breast Radiologist, Medical Director of The Breast Care Center at Liberty Hospital, and Assistant Professor of Radiology at the University of Missouri-Kansas City School of Medicine.

Dr. Patel’s professional interests include recruiting women in medicine and radiology, as she established the American College of Radiology (ACR) Resident and Fellow Section Women and Diversity Advisory Group when she was in training and now serves on the ACR Commission for Women and Diversity. She also serves as President-Elect of the American Association for Women in Radiology and will be the youngest President to hold this position beginning in November 2022. Her interests include mentorship and social media, serving as Associate Editor for Digital Media for the Journal of the American College of Radiology. She is also Immediate Past Chair of the ACR Young and Early Career Professional Section and currently Co-Chair of the Society of Breast Imaging Young Professionals Section. Her research interests include breast health equity, digital breast tomosynthesis, and artificial intelligence.

She also has an avid interest in radiology political advocacy, serving on the RADPAC Board. She is also a former ACR Rutherford Lavanty Fellow in Government Relations. She is also the first female and youngest radiologist recipient of the ACR Howard Fleishon MD Advocate of the Year Award. She is a staunch advocate for patients receiving access to standard radiological care, particularly in annual mammography screening beginning at age 40. Consequently, she was involved in helping pass the bill in the state of Missouri ensuring annual screening 2D and 3D mammography coverage beginning at age 40 in average-risk women, as well as the more recent bill ensuring coverage for above average-risk women in accordance with ACR recommendations. As a result of these efforts, she is the 2021 recipient of the Kansas City Medical Society’s Patient and Community Advocate Award.