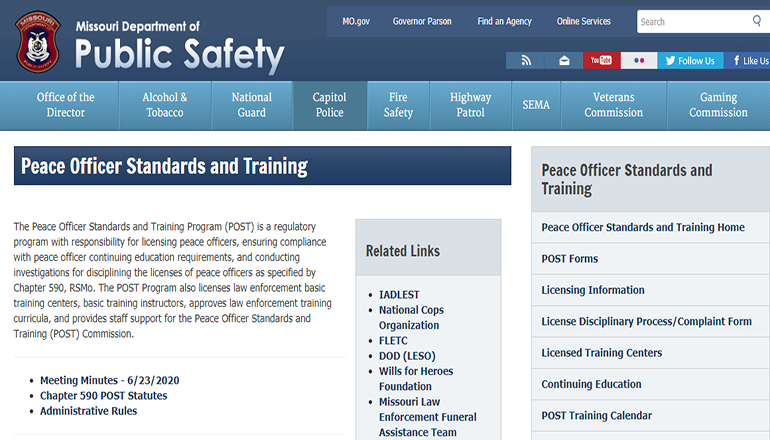 The Peace Officer Standards and Training (POST) Commission has voted to require annual training in de-escalation techniques and recognizing implicit bias for all Missouri law enforcement officers. Missouri officers will take a one-hour course in each area as part of their required 24-hours of annual continuing education training.

“At its June meeting, I challenged the POST Commission to take a leading role in advancing the training Missouri provides its officers and equip them to improve relations with the public,” Governor Mike Parson said. “I applaud the commissioners for following through on that challenge and carefully considering the issues faced by law enforcement today with input from both Missouri citizens and law enforcement officers.”

“We believe these training changes, which were unanimously approved by the POST Commission, will lead to better interactions between officers and the public and can help strengthen relations with the communities we in law enforcement serve,” said Commission Chair and Platte County Sheriff Mark Owen.

As required by state statute, once written, the new POST rules will be filed with the Missouri Secretary of State and the Joint Committee on Administrative Rules and subject to a public comment period. The rule-making process generally takes at least six months to complete. The new training requirement will apply to officers in 2022.

The Commission also voted unanimously to grant preliminary approval for Lincoln University’s proposal to establish a law enforcement basic training academy. The proposed training academy would be Missouri’s 20th and the nation’s first at a Historically Black College and University. Lincoln University said the academy could have a far-reaching impact as it seeks to attract minority law enforcement recruits to a residential program at an academic institution.

“Minority recruitment is probably the most difficult thing right now,” POST Commissioner and Springfield Police Department Chief Paul Williams said. “While Springfield had previously had African American officers in the past, there were none when I took the chief’s position. It took eight years to build up to five black officers.”

Cole County Sheriff John Wheeler testified in support of the Lincoln University training academy saying, “I support this 110 percent. I think you should go forward. We’re down on [deputy sheriff job] applicants, but trying to get minority applicants has been even harder. We have to fix this.”

Licensing of a Lincoln University academy by the Missouri Department of Public Safety (DPS) could come only after a site visit and review of planned policies and procedures, proposed courses, lesson plans, instructor qualifications, and the academy’s advisory board. The POST Commission would then make a final recommendation to DPS on whether to grant the license.

The POST Commission also appointed two committees to work on two other proposals:

The Commission tentatively scheduled a special meeting on December 15 to review the committees’ work.