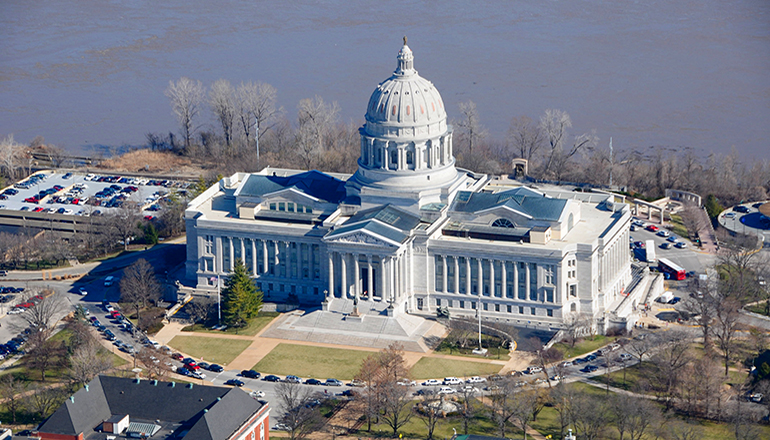 (Missouri Independent) – The fate of a wide-ranging crime bill was called into question on Tuesday over a provision that would stiffen penalties for lying under oath to the legislature or obstructing a legislative investigation.

During a conference committee on Tuesday morning convened to work out differences on Senate Bill 53, House members said the bill stands no chance unless it includes provisions added in that chamber that would allow the legislature to request a court order to compel witnesses to testify and empower lawmakers to grant immunity to witnesses in exchange for testimony that could be self-incriminating.

Meanwhile, Senators said they’d been told the bill will be vetoed by Gov. Mike Parson if those proposals are included.

“I did receive a phone call from the governor’s office over the weekend, and they were adamant that he’ll veto the bill if that language is in it,” said Senate Minority Leader John Rizzo, D-Independence.

At a press conference Tuesday afternoon, Parson confirmed he will veto any bill that includes those provisions. He called the move a “total power overreach of government.”

“I’ll tell you the simplicity of it,” Parson said, “it may be good today for some, but you don’t know who is going to be sitting in those seats tomorrow and how they may abuse that power. I just think it’s a total power grab, to be even considering that. If that makes it to my desk, whatever it’s on, will be vetoed.”

Members of the House said what the Governor ultimately decides to do shouldn’t dictate the path forward on a bill that has garnered bipartisan support.

“I think it’s an excellent bill,” said Rep. Lane Roberts, R-Joplin. “If the governor is inclined to veto the entire bill over one issue, that’s a decision for him to make. It’s no different than the one we’re making here today.”

The bill in question was approved by the Senate earlier this year with a focus on two proposals — banning certain police chokeholds and repealing a requirement for Kansas City police to live in the city.

Numerous amendments were added in the House before it passed 138-11 last week. Changes ranged from clarifying a law that stops automatically charging 17-years olds as adults to a requirement that prisons provide women in custody with free tampons and pads.

It also includes language that seeks to place regulations on Christian boarding schools in Missouri.

But the amendment drawing controversy on Tuesday, pertaining to offenses against the General Assembly, has long been a top priority of House Speaker Rob Vescovo.

The proposal was inspired by the 2018 push to impeach former Gov. Eric Greitens — in particular, the testimony to a House investigative committee of newspaper publisher Scott Faughn.

In early 2018, Faughn paid $120,000 in cash in several installments to a St. Louis attorney who was representing the ex-husband of the woman who accused Greitens of coercive and violent sexual misconduct.

Shortly after the first payment, St. Louis television station KMOV broadcast a recording provided by the ex-husband of his former wife detailing how Greitens allegedly tied her up, stripped off her clothes, photographed her naked without her consent, and threatened to release the image if she told anyone about their affair.

The recording was made without the woman’s knowledge and publicized without her consent.

Faughn kept the payments secret for months while continuing to cover Greitens both in his newspaper and on his TV show. When the payments were eventually revealed during a court proceeding, Faughn fled the state to avoid a subpoena from Greitens’ lawyers.

When he was eventually called to testify before the House investigative committee, Faughn said under oath that the money was for the purchase of recordings of Greitens’ alleged victim talking about physical abuse for a book he was working on — even though other journalists got the recordings for free.

Lawmakers publicly questioned his explanation, especially after the attorney whom he paid testified that Faughn told him the money came from an unnamed wealthy Republican who did not like Greitens.

When he first proposed the bill last year, Vescovo said it was important to prevent something like that from happening again and that the legislation was designed “to protect the integrity of the people’s process.”

Faughn, whose book on Greitens has never been published, did not comment when reached via email Tuesday. Parson is a regular guest on Faughn’s TV show that airs on Sunday mornings in certain markets around the state.

On Tuesday, Rep. David Evans, R-West Plains, said there was no way Senate Bill 53 could move forward unless Vescovo’s proposal was included. His remarks were echoed by Rep. Justin Hill, R-Lake St. Louis.

“It really is a nonstarter for me,” Hill said.

“We’re still working through that issue,” he said, later adding: “We’re still having ongoing conversations with the speaker’s office on that issue.”