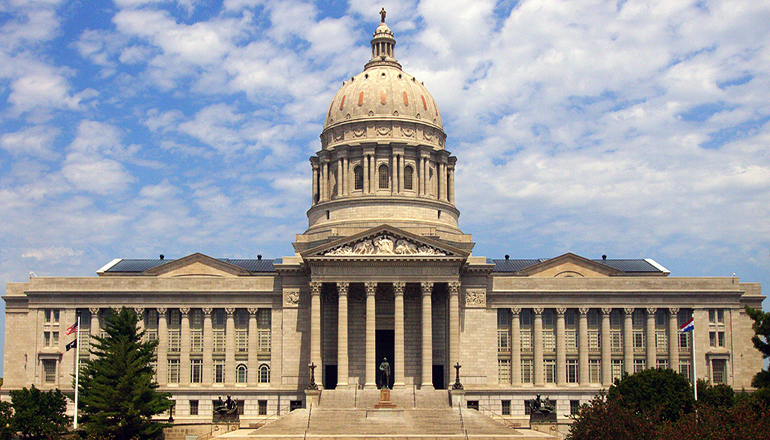 (Missouri Independent) – Fireworks, this week over the sudden removal of an LGBTQ history exhibit from the museum in the Missouri Capitol caught the attention of John Cunning.

For 24 years before he retired in 2018, Cunning oversaw the museum as part of his job at Missouri State Parks.

So when he read Gov. Mike Parson’s explanation for removing the exhibit — that it didn’t get the necessary pre-approval of the board of public buildings — Cunning says he was “befuddled.”

“In the 24 years I was involved with the state museum, we didn’t have to go to the governor’s office or to the board of public buildings to get permission to put up an exhibit,” Cunning said in an interview Friday morning. “That never happened.”

His experience echoes that of Chuck Hatfield, a longtime Jefferson City attorney who worked in the attorney general’s office under Democrat Jay Nixon.

The board of public buildings is made up of the governor, lieutenant governor, and attorney general. It’s tasked with general supervision and charge of state facilities at the seat of government.

Hatfield tweeted Thursday that he served as staff for that board on behalf of the attorney general for a decade and that it was never involved in approving museum displays.

Neither the governor’s office nor the Department of Natural Resources, which oversees Missouri State Parks, responded to requests for comment Friday morning.

The exhibit in question consisted of banners curated by Missouri-Kansas City history students, recounting the activism of the city’s LGBTQ community. It was on display for only four days before it was taken down, even though it had been scheduled to remain until Dec. 26.

Word of the removal spread on Facebook following a post by a GOP legislative staffer celebrating the display being taken down.

“Thanks to the efforts of several of our great elected officials, the exhibit has been removed from the Missouri State Museum! To God be the glory!” the staffer posted.

Parson said Thursday through a spokeswoman that he was unaware of the exhibit until “after receiving several complaints regarding the display.” State law requires the department to coordinate with the board of public buildings regarding displays in the museum, Parson’s spokeswoman said. That process wasn’t followed, so the display was removed.

The St. Louis Post-Dispatch reported Friday that Rep. Ann Kelley, R-Lamar, emailed the department demanding to know the reasoning behind having “gay rights banners hung up in the state museum at the Capitol.”

State Sen. Greg Razer, a Kansas City Democrat and the Senate’s only openly gay member, quickly decried the removal of the exhibit, saying it represented a “personal insult to my community and me.”

He doesn’t believe the governor’s explanation, calling it a “poor bureaucratic excuse” and noting that years of meeting minutes posted online of the board of public buildings show no evidence that museum exhibits have ever been a topic of discussion.

“We know what happened,” Razer said Friday morning. “They were trying to keep extremists and homophobes quiet, so they just got rid of the exhibit and hoped no one would notice. Unfortunately for them, we found out about it. And this was the best excuse they could come up with.”

Razer added: “I’m personally offended that my history is deemed to be not fit to be displayed in my Capitol building.”

After learning the news, Razer said he was able to speak to leadership at DNR, who repeated the governor’s rationale for removal.

He said he was also told there was fear the exhibit could be vandalized.

The exhibit should be put back in the museum as soon as possible, Razer said, and he promised to continue applying pressure until that happens.

“I’m sorry my existence offends them,” Razer said. “But here I am.”

By Friday evening, Parson’s administration announced the exhibit would not be returned to the Capitol and instead would be moved down the street to the Lohman Building.

Razer was unimpressed with the decision.

“The Lohman Building sure ain’t the Capitol rotunda,” he said. “Sounds like we’ve been moved from the broom closet to a walk-in closet. Better, but still a closet.”

Cunning said he couldn’t recall a time during his tenure when he had to remove an exhibit from the Capitol museum. There were times he had to answer questions about why an exhibit was on display, he said, or how it fulfilled the museum’s mission.

“But I don’t remember ever being told to take an exhibit down,” he said.

The state museum in the Capital has a responsibility to tell the history of Missouri, Cunning said.

“Sometimes that history is uncomfortable,” he said. “But we still have to tell that history.”