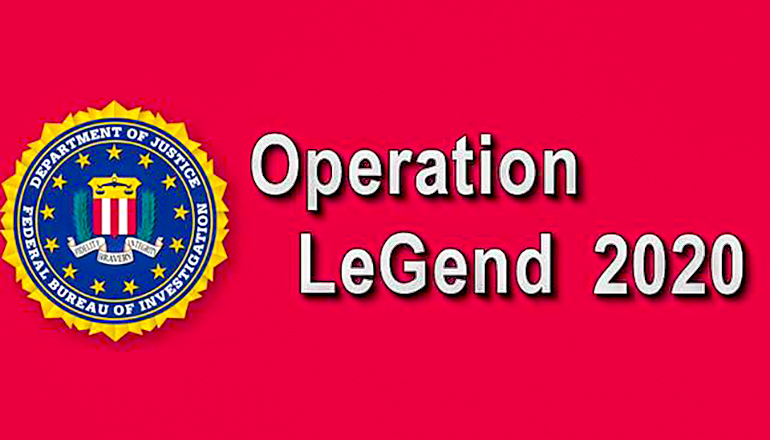 “On behalf of the team of federal law enforcement agencies involved in this groundbreaking initiative, I made certain promises when Operation LeGend was launched,” Garrison said. “Those promises have been kept. The FBI, the ATF, the DEA, and the U.S. Marshals Service worked collaboratively and effectively with the Kansas City Police Department and other local law enforcement agencies to accomplish the objectives of Operation LeGend. We created a model for others to follow. Our success in Kansas City is now being duplicated in eight more cities across the nation.”

“We promised that federal agents would work alongside local law enforcement, in a supportive role to provide additional support and assistance,” Garrison said. “That promise was kept, and in the process, valuable lessons were gained for how to confront violent crime.”

For example, the FBI has doubled the number of agents working violent crime cases and embedded agents with the Kansas City Police Department’s violent crime unit. The ATF has added a new unit that is permanently embedded with Kansas City’s assault squad. Intelligence has been gained and shared among law enforcement agencies to improve future investigations. “These strategies for collaborating with local law enforcement have been successful, and will continue,” Garrison said.

“We promised there would be no storm troopers patrolling the streets of Kansas City, no interference with the civil rights of protesters engaged in public demonstrations,” Garrison said. “Despite accusations of a federal occupation, we have worked cooperatively with both local law enforcement and local community leaders. None of those dire predictions from our critics came to pass.”

“I’ve also said, from the start of Operation LeGend, that law enforcement would not be the sole solution to violent crime,” Garrison added. “Violence is a community issue, and requires a community-wide response.”

“I hope that by keeping the promises we made, by doing what we said we would do, we’ve established a level of trust and credibility that will continue to bear fruit,” Garrison said.

Among those arrested since the launch of Operation LeGend, 126 are federal defendants in the Western District of Missouri (with additional federal cases referred to U.S. Attorney’s Offices in Kansas and Texas). Among the remaining arrests, 37 were homicide cases. In addition to the arrests, agents and officers have seized 176 firearms, large quantities of illegal drugs, and several stolen vehicles during Operation LeGend.

Among the homicide arrests made under Operation LeGend was the defendant charged in state court with the murder of 4-year-old LeGend Taliferro, in whose memory the operation was named.