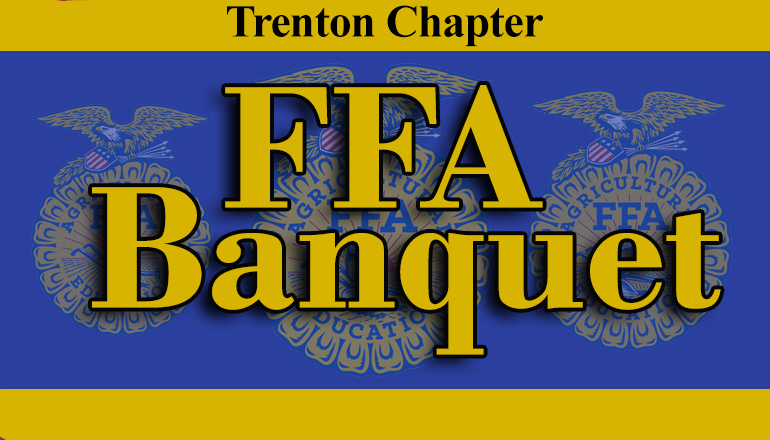 Next year’s President of the Trenton FFA will be Colton Roy. The Vice Presidents are Rebecca Urich and Kaci Persell. The Secretary will be Gracyn Rongey, and the Treasurer is Makenzee Epperson, Sentinel is Gavin Chambers, ChaplainLevi Johnson, and reporters Randy Bowden, Hannah Bowe, and Haven Burress.

Announced as Stars of the FFA Chapter were Kidridge Griffin in farming; Jaycie Griffin in placement; Gracyn Rongey for agri-business; and Cade Claycomb as a Greenhand. Special recognition also was extended to Kidridge Griffin for being selected the Missouri STAR Farmer and for Trenton having the number one FFA Chapter among 350 in the state. High school principal Kasey Bailey received the honorary chapter degree.

The Brinser family award to an outstanding senior was presented to Kidridge Griffin. The Black family award to an outstanding junior was won by Colton Roy. The Blue and Gold award went to Kaci Persell. The Black and Gold award was given to Olivia Roberts. Randy Bowden received the chapter community service award. The Kiwanis loan goes to Katelyn Clark. The Frank Hoffman Memorial Loan went to Seth Doolittle. An award from BTC Bank was given to Kaylynn Stanton.

Brownfield belt buckles presented by KTTN were given to Rebecca Urich and Makenzee Epperson.

There were several recipients of Meservey scholarships to the FFA summer camp. Chapter leadership and scholarship awards also were presented.

It was reported 156 members and guests attended the Trenton FFA banquet.