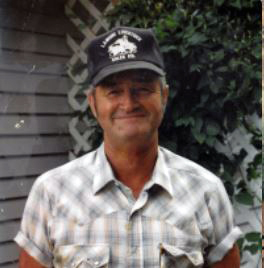 He was born on July 24, 1932, the son of Orville and May (Hunsicker) Parkhurst. He was the second of six children.

Loren attended grade school at a country school just a few miles from home. He started his high school years at Hatfield where he loved to play sports. After graduating from Hatfield, he helped with a few odd jobs around the farm. He helped others put up hay, helped an electrician with electrical needs, and worked construction. Once while putting up hay, he was referred to as a human elevator. He loved the work on the farm.

After meeting at ice cream socials and many youth groups, Loren and Myra Parkhurst were united in marriage on September 11, 1954. They were married for 67 years and to this union, five girls blessed their lives: Carmen, Pamela, Becky, Carolyn, and Rhonda.

Loren was a member of the National Guard and took time out of his farm life to travel to Albany once a month to participate in drills. After nine years he decided to retire from the National Guard and focus on farming. He also enjoyed being a board member for the REC, PCA, and Lamoni Co-op. He served on the Co-op board on and off for over 30 years. You could always catch Loren watching his girls play sports, attending family outings, and traveling on family vacations to Colorado and the Iowa State Fair.

Farm work was Loren’s biggest passion. Growing up, helping his father on the farm, helped to develop Loren’s passion for the lifestyle. Being run over by a tractor, building miles of fence while digging post by hand, and betting the grandchildren that he could tag a calf were some of the stories he enjoyed telling. On the Grand River farm, Loren raised hogs, dairy and beef cows, and grew corn and soybean crops. He also worked with other farmers and helped haul livestock and grain, sprayed crops, and performed custom combine work. In between these activities, he also sold Archer Oil which he was the top salesman for many years. On the Hatfield farm, Loren put his energy into making improvements and concentrated on cattle and hay. Loren was a hardworking, full of humor, and family dedicated person.

He was preceded in death by his parents; brothers, Alvin, Paul, and Rollan Parkhurst; half-sister, Melva Jean Ramsey; daughter, Carmen Gustafson and a great-grandson, Callan Redding.