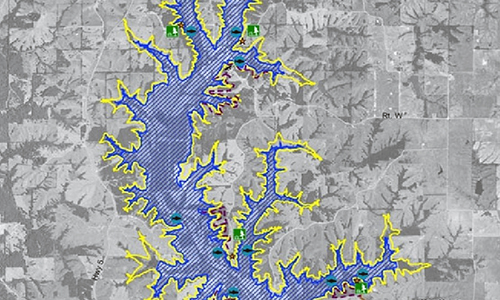 At their regularly scheduled monthly meeting, the North Central Missouri Regional Water Commission (NCMRWC) voted unanimously to name the East Locust Creek Reservoir (ELCR) in honor of Missouri’s senior Senator, Roy Blunt. Both the Sullivan County Commission and the NCMRWC received a letter from Governor Mike Parson to consider naming the ELCR in honor of retiring Senator Blunt. Chairman Harve Rhodes placed the issue on the agenda for consideration. Breaking precedent, and with the permission of the Commissioners, the public was invited to share their thoughts and opinions relative to the naming of the reservoir before taking up the Resolution for consideration.

Earlier this year, the NCMRWC adopted a naming convention guided by “Legacy” and “Heritage” to honor the history and heritage of Sullivan County and honor the legacy of the families and those who supported the creation of the Reservoir. As a part of that, some 137 features that could or should be named were identified.

Chairman Harve Rhodes, “Given the sustained and successful efforts of Senator Blunt leading to approximately $80 million in funding for the reservoir, the Commission thought it entirely fitting to honor Senator Blunt by naming the reservoir for him and his service to the reservoir and the region. I’d be remiss if I didn’t mention Governor Parson who has also been a hero in making the reservoir a reality. I was glad to place consideration of the name change on the agenda”

Presiding Commissioner Chris May stated, “From the beginning of his tenure as our Senator, Roy Blunt made the reservoir his top priority. I have personally witnessed the astounding work of the Senator and his outstanding staff. Their efforts went far beyond the funding, which was considerable itself. The Senator and/or his staff helped every step of the way.”

Brad Scott, General Manager of the NCMRWC stated, “The reservoir project got off the ground thanks to the efforts of Senator Kit Bond. Senator Bond asked Senator Blunt to carry the banner for the reservoir and he never wavered in his support. Truly, Senator Blunt’s efforts were astounding. The project has been blessed by tremendous bi-partisan support of all of the elected officials that represent the area.”

Upon being informed of the naming, Senator Blunt stated, “I’m very grateful to the North Central Missouri Regional Water Commission for this honor. I want to thank everyone in the community, both past and present, who helped make this project a reality. When you don’t have a reliable water supply, it’s difficult for families, farmers, businesses, and school districts to plan for the future. The reservoir will help provide that certainty, improving the quality of life and strengthening economic development. I am committed to ensuring the federal government continues to make this project a priority.”