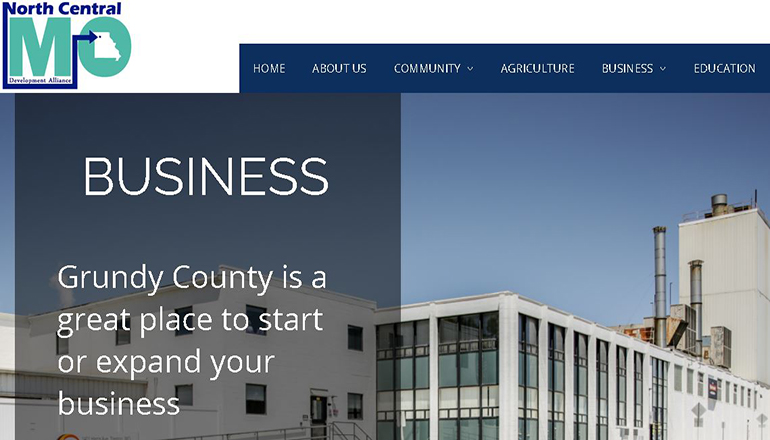 Sharp reported the representative was “blown away” with the internet capabilities in the area and thought Grundy County had a good cost of living.

Soptic noted the representative said the community could expect about 25 to 50 jobs if a new business was brought to town.

Sharp reported close to $2 million will be given in the state through Build Back Better grants. He noted feelers had been put out on projects in the area to find funding for.

Soptic mentioned there were 385 Build Back Better grants that would be available. Some were specifically for rural communities.

Soptic presented information on the impact of commuters and remote workers in Grundy County.

She reported the county’s out-commuting is 51.7 to 66% and the weekday daytime population triples due to in-commuters. Soptic suggested that businesses could expand or enhance their services to attract in-commuters and out-commuters.

She reported that remote work is being recognized as an industry and included as a legitimate attraction strategy for economic development. She said the community needed to start engaging those individuals and appreciating them. She noted they could be an attraction avenue and get businesses coming to the community.

Soptic said remote workers are usually independent and self-driven, but they are still human and need interaction. She called it important to have opportunities for professionals to connect and interact.

She offered ideas for how to make the community remote worker-friendly and attract remote workers. One was incentives and relocation assistance. Another was alternative workspaces where workers could come for a while and go back home.

North Central Missouri Development Alliance Board Member Travis Elbert said he believed an alternative workspace like what Soptic was describing could be beneficial for some people. He thought the best bet would be to attract individuals who grew up here.

Soptic noted she keeps finding more people working from home. She knows several families moved back to Trenton during the pandemic.

Soptic acknowledged one challenge for remote workers is housing, but she said that was a challenge in many places.

She reported the retirement risk is high in Grundy County. There are 3,469 individuals who are 55 or older, and the national average for an area the size of Grundy County is 2,856. She mentioned that though many individuals were at retirement age, that did not mean they would retire immediately.

Soptic said the county needed to think about how to help transitioning businesses that have a retiring owner and match them with a new buyer. She called it a “two-way street” and said both have to work to make it happen, and the owner may have to work with the buyer to learn the business.

Sharp added that a new person might be looking at the numbers and not the current owner’s life’s work. Soptic acknowledged it could be difficult for young and middle-aged families to take a jump, especially in the current economy.

Grundy County Presiding Commissioner Phillip Ray reported he has given information to high school students about how much tradespeople make. Sharp said he had heard from a lot of 16 to 18-year-olds who want to go into trades.

Chris Hoffman with the Industrial Development Corporation said he thought a committee should be created to discuss remote workers. Anyone who wanted to be on that committee was to tell Sharp.

Hoffman gave an update on the Thompson River Streambank Stabilization project. He reported the IDC raised about $145,000 privately for the project.

He noted that when the Natural Resources Conservation Service added funds, he failed to think about the IDC having to pay 25%, and it was about $18,000 short.

Hoffman has asked some people for extra funds, and he noted State Representative Rusty Black was working the Missouri Department of Transportation to possibly get extra funds.

Hoffman said funds could go through Green Hills Rural Development to be tax-deductible, or they could go to the IDC.

Sharp reported Trenton has been the executive director of NCMDA for about nine months. He said he has been through training and talked to business owners to see what they needed help with. He thinks it is important to teach children about Trenton, and he believes there are a lot of assets in the city.

Sharp stated one of his goals is getting people together to discuss what is needed to keep Trenton successful. He said it was a victory to have everyone together on March 29th and communicate.