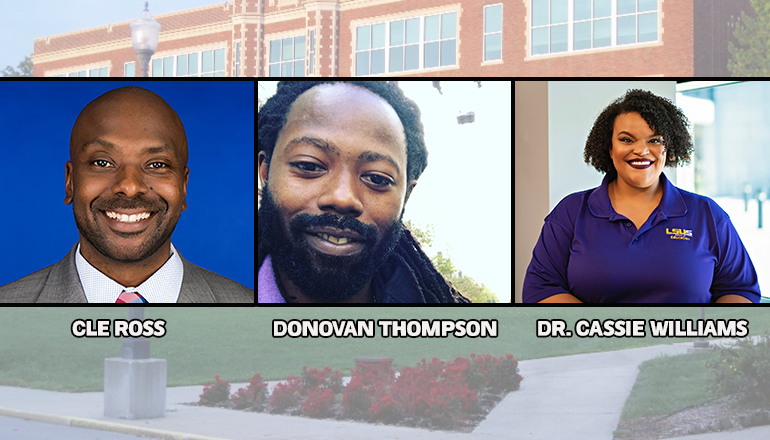 North Central Missouri College will host a Diversity and Inclusion Alumni panel on Thursday, March 24, at 1:00 p.m. in Cross Hall 208 or virtually. Students, staff, and the public are invited to attend. The panel will feature three alumni Cle Ross, Donovan Thompson, and Dr. Cassie (Hunt) Williams. Panelist will share their story and experiences as it relates to diversity and inclusion.

Cle attended NCMC from 1999-to 2000, where he played for the Pirates Baseball team. After graduating from NCMC, he attended the University of Arkansas, Pine Bluff. He continued to play baseball at the NCAA Division 1 level and received a degree in Mass Communications. In 2017, Cle was inducted into the NCMC Athletic Hall of Fame for his success as an NCMC baseball player. Currently, through his leadership as the Executive Director of Kansas RBI (Reviving Baseball in Inner Cities), Cle helps disadvantaged inner-city youth with mentorship through educational programs and activities related to baseball and softball.

Donovan attended NCMC from 2001-2004, where he was a member of the NCMC men’s Basketball team and earned All-Conference honors during the 2003-2004 season for his performance on the court.  Upon graduation, he continued his sports and academic careers at Park University and graduated with a Bachelor of Arts degree in IT Software Engineering.  Donovan was named a Distinguished Alumni by the NCMC Foundation for the class of 2020. Currently, he works remotely as a software engineer and travels the world while working on different tech projects.

Dr. Williams attended NCMC from 2007-2009, where she was a member of the NCMC’s women’s basketball team and was named All-American and the 13th highest scorer in the nation her sophomore year. After attending NCMC, Cassie continued to play basketball at Truman State University, where she earned a bachelor’s degree in Communication Disorders and a master’s in Special Education. She then earned her doctorate in special education from the University of Kansas. Cassie was inducted into NCMC’s Athletic Hall of Fame for her success as an NCMC basketball player in 2017. Currently, she is an Assistant Professor of Special Education at Louisiana State University-Shreveport.

Those wishing to attend the Diversity and Inclusion alumni panel can do so in person, or contact Kristi Harris, Chief of Staff for the virtual link at 660-357-6203 or [email protected]