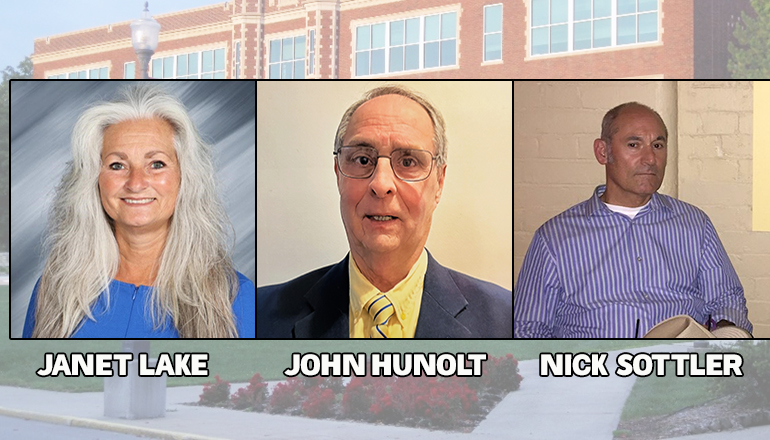 North Central Missouri College Foundation announces the Distinguished Alumni Class for 2021, John Hunolt, Janet (Boyd) Lake and Nick Sottler.  Honorees will be recognized during the Pirates Ball on March 26, 2022, at the Ketcham Community Center on the campus of North Central Missouri College.  The Pirates Ball is to honor distinguished alumni, Voyage Fund donors, and all NCMC family and friends.  The event is a fundraiser for the Voyage Fund, an annual giving campaign to raise unrestricted funds to help meet the unmet needs of the College.

John began working in Ottumwa, Iowa as a State of Iowa Vocational Rehabilitation counselor, and for over 36 years assisting clients with becoming employable or helping them find financial support to attend college to become employable.

Over the years, he has devoted numerous hours volunteering and helping others in the community. A few of these include: helping with two local food pantries, assisting with the setup/dismantle of the winter Holiday Nights & Lights display, serving on the Ottumwa’s cemetery board, serving on Indian Hills Community College Diversity Committee, being active in Kiwanis, active in his church, and president of the local TPA group.

John retired in 2010, and in 2013 John received the Ottumwa Area Chamber of Commerce Gene Community Service Award. He and his wife, Sylvia, received the Indian Hills Community College Foundation Outstanding Retiree Award in 2018. In 2021, he was awarded the Iowa Governor’s award for volunteering. They are dedicated supporters of IHCC basketball team, following their games and making frequent trips to Texas to visit their son Jason and his wife Deatta.

Janet Lea (Boyd) Lake left her public education in 1976 while a freshman at Grundy R-V High School to enter the workforce and to begin the next phase of her life as a wife and mother. Janet and her husband, Rick Lake, were married in 1980 and welcomed their first child, Sarah, in 1984.  During the next four years, they welcomed three children, Samuel, Seth, and Sallie, to their growing family. While taking care of her family and working at various jobs Janet came to realize she needed to improve her situation by completing her education.

After earning her GED through North Central Missouri College, she attained a Child Development Accreditation in 1990 while driving a bus for the Green Hills Head Start program. Three years later, she started work as a full-time special education aide with the Grundy R-V School District and enrolled at NCMC. Janet completed her Associate in General Studies degree in 1996 and her Bachelor’s degree from Graceland University through NCMC in 1998. After graduation, Janet accepted a pre-school teaching position at Pleasant View R-VI.  “I have remained in my preschool position for the past 24 years”. Janet went on to share, “I am very blessed to do what I love.” In 2001, Janet received a Master’s from Northwest State University.

Through their union of 41 years, Rick and Janet are the proud parents of four children; Sarah died in 2006 and was blessed with 11 grandchildren.

Nick Sottler is a contract employee at the National Geospatial-Intelligence Agency (NGA), DoD. Joining the agency’s college, the National Geospatial-Intelligence College (NGC) in 2002, he has served as a course developer, as an Executive Assistant to the Director, NGC, as an instructor/facilitator on NGC’s Faculty Development Team and, since 2015, has been an instructor/facilitator supporting NGA’s New Employee Orientation Seminar.

Nick earned a Bachelor of Science degree in Engineering (Construction Science) from Kansas State University and a Master’s degree in Business Administration from Averett University.

Retiring from the Marine Corps in 1996 – and prior to joining NGA in 2002 – Nick was a contractor at the Marine Corps’ Battle Staff Training Facility working in the Combat Modeling and Simulation Branch where he led a team that supported the tactical/operational training of commanders and staffs of combat and combat support organizations.

Nick is a student/hobbyist of human behavior, the art of leadership, and American history. He is an American Car enthusiast (vintages 1950s-1960s) and a devotee of pro-football and of early Rock and Roll music – Elvis Lives.

Nick and his wife Theresa reside in the Mount Vernon area of Alexandria, VA. They have one son, Aric, who is a Foreign Service Officer, presently posted as a Vice Consul at the American embassy in Beirut, Lebanon.

For Pirates Ball ticket information or reservations contact NCMC Director of Development Alicia Endicott at 660-357-6403 or at [email protected].