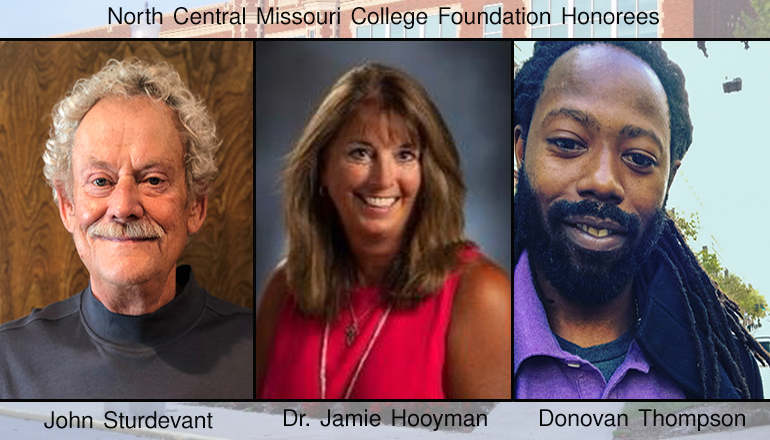 North Central Missouri College Foundation announces the Distinguished Alumni Class for 2020 honorees: Dr. Jamie Hooyman, Mr. John Sturdevant, and Mr. Donovan Thompson. Distinguished Alumni honorees will be recognized during the Pirates Ball on March 13, 2021, at the Ketcham Community Center on the campus of North Central Missouri College along with Voyage Fund donors, and all NCMC family and friends. The event is a fundraiser for the Voyage Fund, an annual giving campaign to raise unrestricted funds to help meet the unmet needs of the College.

Currently, Dr. Hooyman is serving as Provost at Northwest Missouri State University. She began that role in November 2017 after serving as the university’s interim provost. When Dr. Hooyman moved from vice provost to provost, she became the first female in the university’s history to serve as its chief academic officer. She oversees learning, academic quality, and student success. She leads the development and assessment of academic programming in partnership with President Jasinski, the Board of Regents, the Northwest Leadership Team, faculty, staff, and students.

A native of Trenton, Dr. Hooyman served North Central Missouri College from 2006-2017 in many capacities, including Vice President of Institutional Effectiveness. In her role, she provided leadership for the college’s academic environment, including instruction, student services, grants, dual credit and outreach, business and industry, and information technology. She also served on a number of state-level committees and taskforces while at NCMC.

Dr. Hooyman also served on the faculty at the University of Central Oklahoma in Edmond, OK, where she taught undergraduate and graduate courses in its Department of Kinesiology and Health Studies. Prior to working in higher education, she instructed and managed exercise programs at recreation and healthcare facilities.

Dr. Hooyman is the daughter of Bill & Peggy Ausmus of Trenton. Jamie and her husband Gary have three children, Maddison, Mallory, and Mason.

Mr. John Sturdevant, RA, grew up in Trenton, Missouri, where he attended grade school through 12th grade and then one year at Trenton Junior College (1970-1971), now North

Central Missouri College. He then transferred to Kansas State University and graduated with a bachelor of architecture and design degree in 1975. After receiving his degree, John moved to St. Louis to start his 45-year career.

John worked 40 years at Heitmann & Associates and retired in 2017 as Senior Vice President of Technical Services. Heitmann & Associates is a consulting engineering firm specializing in exterior façades, primarily on high-rise buildings, airports, sports stadiums, and arenas. He had the privilege of working on major structures throughout the world and with some of the world’s most renowned architectural, engineering and construction firms.

John met his wife, Eileen, during an architectural internship in Columbia, Missouri. During their 40 years of marriage, they had two children, Scott and Amy. Scott and his wife Mary have two beautiful daughters, Dylan and Elle.

Life can bring many challenges, and John and Eileen endured many. Their daughter Amy was diagnosed with leukemia in the fourth grade and is now cancer-free. Two years before Amy’s diagnosis, Eileen was diagnosed with Multiple Sclerosis. Eileen passed away in 2020, and during Eileen’s 36 years with MS, John became a caregiver due to the severity. Even though times were sad and difficult, John still found it very rewarding to take care of a loved one.

John is now engaged to Janie Hooker of Tulsa, Oklahoma. Janie has one child and one grandchild. They enjoy family time while splitting time between their homes in St. Louis and Tulsa, the warm beaches of Florida, golf, and yard work.

Mr. Donovan Thompson was born in Nassau, Bahamas, to Gregory and Estella Thompson and has two sisters, Shakara and AJ. He completed high school at St. Augustine’s College in 2000 and left for college to play basketball.

Donovan “Hot Sauce” Thompson attended North Central Missouri College from 2001-2004, attaining an AAS in Information Technology with an emphasis in Computer Networking in addition to a minor in Microcomputer Services. He was a member of the NCMC Men’s Basketball team and earned All-Conference honors during the 2003-2004 season for his performance on the court. Upon graduation, he continued his sports and academic careers at Park University and graduated with a Bachelor of Arts degree in IT Software Engineering. During his time at Park University, he was also a captain on the Men’s basketball team and led the nation in steals his senior year.

Donovan has primarily worked as a Software Engineer for most of his career for companies such as Spotify, ESPN, NBC Sports, Walt Disney Parks and Resorts Online, and the University of Kansas.

He is the CEO of the digital marketing agency New Millennium Tecknology since 2007, co-founder of the cell phone repair and sales store Bahama Smart in 2018, and has even worked with music artists in the Caribbean to launch the Vybez Music App.

Award highlights of his career include being a member of the winning team in ESPN Digital Media’s Third Annual Hackathon in 2013, Sports Emmy Award Winner in 2015 for “Outstanding New Approaches – Sports Event Coverage” for The 23rd Olympic Winter Games while at NBC Sports, and the Spotify Spirit Award for the highest spirited person in the office in 2017.

He has three beautiful daughters, Laylay, Angel, and Shya, and currently works remotely as a software engineer and travels the world while working on different tech projects.

Virtual and in-person tickets for the Pirates Ball are still available. For ticket information or reservations, contact NCMC Director of Development Alicia Endicott at 660-357-6403 or [email protected].