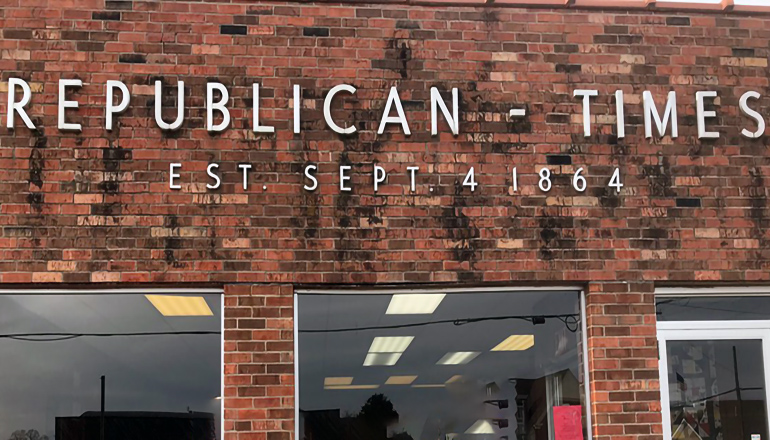 The new owners of the Trenton Republican-Times and Green Hills Weekly Shopper spoke at the Trenton Rotary Club meeting on September 16th. Jamey and D’Anna Honeycutt took ownership of the two on September 1st. They also own the Clinton County Citizen newspaper in Plattsburg.

The Honeycutts have been in the newspaper business for about 20 years. Jamey has served as the publisher of the Cameron newspaper for 10 years. It was Jamey’s time in Cameron that led the couple to find a newspaper to purchase in Northwest Missouri.

Jamey believes local ownership is important in keeping smaller newspapers vibrant. He noted that many small newspapers have gone out of business because of being purchased by large groups that do not understand “local news.” He said small communities want to have a newspaper that is the community’s “one-stop-shop” for information. The Honeycutts’ goal is to provide the community with a good news source, provide a good advertising base, and give back to the community.

Jamey said Lenhart will serve as publisher emeritus and will continue to write a column for the Republican-Times. The current staff will also remain.

During the business meeting, final plans were made for the Trenton Rotary Club’s drive-through fish fry at the FFA cookshack near the Rock Barn on September 18th.

An update was given on Missouri Day Parade activities on October 16th. Letters are to be sent to previous flag sponsors. Anyone wanting to sponsor the United States or Missouri flag can contact Chris Hoffman. The cost is $50 for a three-year sponsorship. Sponsors will be able to designate the purchase in memory or in honor of specific individuals.

The next Rotary Club meeting will be held at the home of Joe DeVorss on September 23rd at 6 p.m. Members will tour DeVorss’s chestnut tree farm and have a hamburger and hot dog cookout. Those who signed up to attend were asked to bring a side dish, their drink, and a lawn chair.