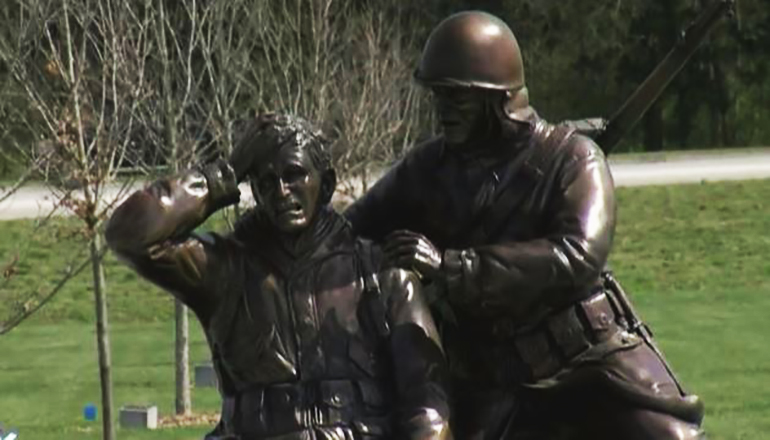 About 1,000 Missouri soldiers lost their lives in the Korean War – a bloody battle that spanned from June 1950 to July 1953. A new memorial on the campus of College of the Ozarks is meant to remember those who served in the 37-month conflict often referred to as the “Forgotten War”. 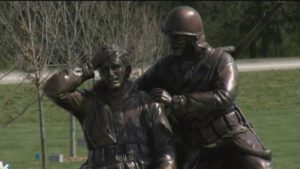 The bronze monument titled The Pain of Sacrifice portrays a service member who just lost his brother in arms. It was designed by James Hall of Nixa, Missouri.

The memorial sits in Patriots Park, along with roughly 150 sugar maple trees standing tall to honor those who have served and paid the ultimate sacrifice for our freedom. The park encompasses Veterans Grove and other memorials built by the college.

More than 1,700 people gathered at a ceremony this week to unveil the statue. College of the Ozarks President Jerry Davis told Springfield television station KOLR he’s honored to have the monument on his campus in southwest Missouri’s Point Lookout.

“We Americans take too much for granted,” he said. “Not only have the Korean War veterans not received the attention they deserve, that’s definitely true for Vietnam veterans. We’re glad to be a part of making their dreams come true and doing what makes us all feel is the right thing.”

“It will be on your shoulders to carry on the legacy of patriotism, and honor, and integrity. This visual recognition is just a small token of what we can do to show our love and our appreciation for these sacrifices,” said Parson, an Army veteran. “It also helps to remind all of us about these sacrifices, so we won’t forget or take for granted of what these men and women fought to make our lives better.”

Kenneth Koeppen, a veteran, said the Korean War has been a sore spot for his fellow soldiers.

“I think this is wonderful because finally we are not the ‘Forgotten War,’” said Koeppen.

A series of clashes along the border led to North Korea invading South Korea in 1950. The United Nations, with the United States out front, came to South Korea’s aid. China and the Soviet Union took sides with North Korea.

The term “Forgotten War” derived from the feud not resonating with the American public. The war was often overshadowed because it fell between WWII and the Vietnam War. What is not forgotten from the bitter battle are the 36,000 brave Americans killed in theater, 103,000 wounded and nearly 7,800 soldiers listed as missing in action.