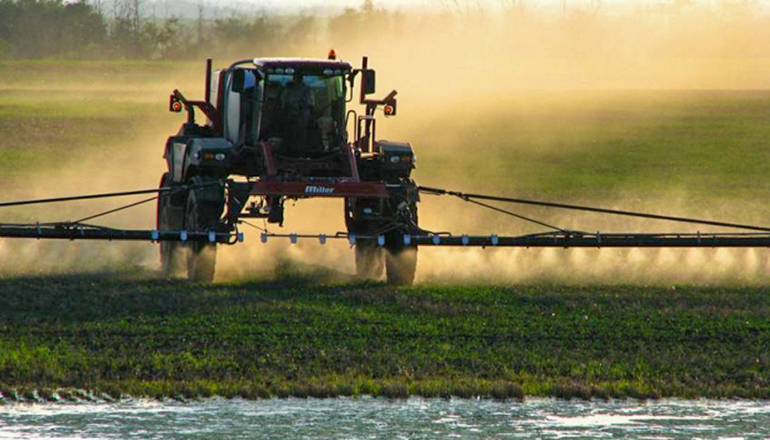 Sometimes it pays to be late.  Nitrogen application is one of those times, says University of Missouri Extension nutrient management specialist Peter Scharf.

Scharf, who has researched nitrogen application in corn, wheat, and other crops for 35 years, continues to favor spring nitrogen application over fall-applied application, especially during wet years, which are becoming more frequent.  “Early nitrogen is not a big deal,” says Scharf. He knows this is controversial but says his years of research validate it.

In 14 on-farm corn experiments, there was only a 1 bushel per acre difference between fields with zero pre-plant and 200 pounds single-shot side-dressed nitrogen and fields with an even split (100/100) between pre-plant and side-dress. “There was no payback for that extra trip,” Scharf says.  Similarly, in continuous no-till corn, the eight-year total yield remained unchanged when comparing plots where pre-plant N rate was either zero or 50, followed by side-dress N.  “That 50 pre gave us no benefit,” Scharf says.  Early nitrogen has its place sometimes, but be prepared to replace it.

Some worry about stressing corn even for short periods. “Do not worry about early stress in corn. Instead, worry about N stress when corn is going great guns,” he says.

Springs in the Midwest continue to trend wetter, and this points to the need for late-applied nitrogen.

Twenty-four of the last 39 years have had above-normal precipitation, according to MU Extension climatologist Pat Guinan. Additionally, heavy rains are happening more often. Missouri has seen a 35% increase in 3-inch daily rain events over the past couple of decades. Scharf says these trends call for changes in application timing.

In May of 2013, a wet year, Scharf applied 140 pounds per acre of nitrogen as anhydrous ammonia plus N-serve to test plots. He recorded a 60-bushel-per-acre advantage compared to the same application in October or December. He also used urea and Agrotain, where a single July application beat a single April application, with a 75-bushel advantage.

The later the better in a wet year, he says.

Scharf looked at nitrogen timing in no-till corn over a decade. Side-dressed plots showed an advantage of 318 bushels over 10 years with 190 pounds less nitrogen, compared to plots with pre-plant N. Less nitrogen and more corn translate to more profits for the producer, says Scharf.

During six years when precipitation was above 15 inches from April to June, Scharf found a 20- to 100-bushel per acre advantage to side-dressing.

Scharf has tested rescue treatments over six years in plots in four states. In wet years, yellow corn still has hope. “The worse it looks, the better it responds,” says Scharf.  Scharf’s 2015 experiments showed an average of 45-bushel per acre payback in the four worst fields when rescue nitrogen was applied at the tassel stage.

Crop color is the most accurate way to diagnose nitrogen needs, he says. Several tools exist to help corn growers know how much to apply in fields where the nitrogen supply varies, but crop color is the most accurate indicator.  Corn crop sensors can show year-to-year variability. Aerial photos, reflectance sensors, and hand-held meters also help. Soil tests are less accurate than assessing crop color.

Spring application, especially in growing corn, comes with risks. Wet weather can hamper application. Scharf recommends that producers have a backup plan for aerial application or other means.

Wheat needs fall nitrogen, but there is some in the soil already. In eight experiments, Scharf did a 40- and 80-pound split application on some plots and a 120-pound spring application on other, nearby plots. There was a 1-bushel yield difference. Delaying nitrogen application to spring is not a problem in wheat, he says.

This may not be the case on sandy soils and when tillers are thin, but neither case is common in Missouri. A single shot pre-jointing seemed to work best in Missouri fields with adequate tillers at green-up. With on-farm field-scale wheat experiments in 2020, shifting N from the green-up stage to the pre-jointing stage (about a month later) netted the farmer 5-10 extra bushels of wheat.