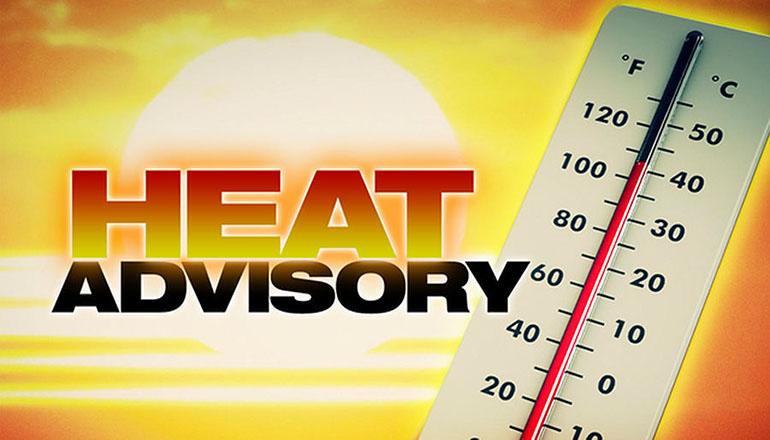 We often think of the period from July 3rd to August 11th as the “Dog Days of Summer.” Some say that it signifies hot sultry days “not fit for a dog.”

The Dog Days of Summer describes the most oppressive period of summer and it is certainly going to feel that way over the next few days as temperatures will be rising into the 90s with heat indices ranging from 100 to 105 degrees.

Heat that one might consider dangerous will be with us over the weekend and the National Weather Services has issued a Heat Advisory for northern Missouri on Saturday, July 24, 2021, from noon to 8 pm which includes the following counties:

Those counties can expect heat indices of as high as 105 degrees which could cause heat illness. To avoid the negative effects of the heat, drink plenty of fluids, stay in an air-conditioned room, stay out of the sun, and check up on relatives and neighbors. Young children and pets should never be left unattended in vehicles under any circumstances. Take extra precautions if you work or spend time outside.

When possible reschedule strenuous activities to early morning or evening. Know the signs and symptoms of heat exhaustion and heatstroke. Wear lightweight and loose-fitting clothing when possible. To reduce risk during outdoor work, the Occupational Safety and Health Administration recommends scheduling frequent rest breaks in shaded or air-conditioned environments.

Anyone overcome by heat should be moved to a cool and shaded location. Heatstroke is an emergency and 911 should be called immediately.

Today:  Sunny, with a high near 92. Heat index values as high as 96. Calm wind becoming south southwest 5 to 9 mph in the morning.

Saturday Night: Mostly clear, with a low around 74. Southwest wind around 5 mph becoming calm in the evening.

Sunday: A slight chance of showers and thunderstorms after 1 pm. Sunny, with a high near 93. Calm wind becoming east around 5 mph in the afternoon. The chance of precipitation is 20%.

Sunday Night: A chance of showers and thunderstorms after 1 am. Partly cloudy, with a low around 71. The chance of precipitation is 30%. New rainfall amounts of less than a tenth of an inch, except higher amounts possible in thunderstorms.

Monday: A chance of showers and thunderstorms before 1 pm. Mostly sunny, with a high near 90. The chance of precipitation is 30%.