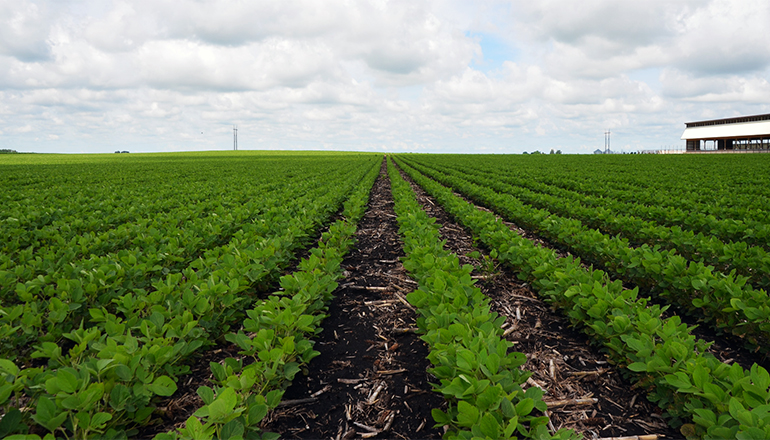 MU Extension works with farmers to use their equipment to compare treatments on their fields using aerial imagery and GPS-referenced yield monitor data. The MU team works with the farmers so they do not need to change harvest methods. Farmers receive aerial images of their fields and summary reports of test results on their farm and other farms in the same trial, he says.

A new trial this year looks at how soybean seed treatments affect early-season diseases and pests. MU Extension plant pathologist Kaitlyn Bissonnette leads the effort to compare seed treated with fungicide, seed treated with fungicide and insecticide, and seed treated with neither. Participating farmers choose their own fungicide and insecticide. MU Extension provides disease scouting and aerial imagery twice in the first six weeks and weekly insect sweeps for six weeks after soybean emergence. Because of the effort needed to accomplish this, Bissonnette is looking for farms no more than 75-100 miles from Columbia for this trial.

Other trials still available in 2019 include:

• Nitrogen response and efficiency in corn and milo. Farmers can compare their current nitrogen rate with different nitrogen rates. The farmer chooses the nitrogen source and timing.  A trial can include aerial imagery of the field to assess nitrogen status.

• Late-season fungicide trial on soybean. The farmer decides the soybean variety and fungicide. Fungicide is applied at the R3 stage. MU takes aerial images and scouts twice during the trial.