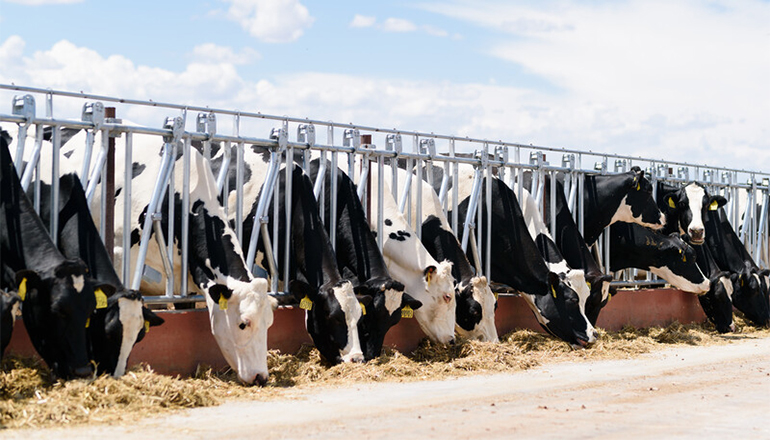 Early breeding allows lactating cows to be put on grass at peak quality and quantity when the nutritional need of cows is highest.

Researchers at the University of Missouri’s Foremost Dairy Research Center near Columbia are the first to use the Double Ovsynch timed artificial insemination (AI) protocol with a grazing dairy herd.

This year MU Extension dairy veterinarian Scott Poock bred cows in late April, two weeks earlier than usual. By front-loading the breeding season, Poock hopes to narrow calving to a six-week period from Feb. 1 to March 15.  The controlled calving window makes the most of the pasture-based grazing system at Foremost, Poock says. He wants cows and calves grazing when forage peaks. He also wants to maximize the lactation period.  This puts some pressure on cows to get pregnant right away. “They have to calve when we want them to or they fall out of the system,” he says.

Poock used Double Ovsynch to breed the 30-head grazing herd. While Double Ovsynch is commonly used in confinement herds in the United States, Foremost is the first to use the system in a grazing herd, Poock says.  To move all cows in the herd to the same breeding cycle, dairy workers insert a controlled internal drug release (CIDR) applicator coated with progesterone into each cow’s system. The progesterone is released into the bloodstream at a controlled rate to synchronize the estrus.  The flexible wings of the T-shaped applicator collapse to form a rod for easy insertion. The attached tail removes easily. Removal results in a drop in plasma progesterone and triggers estrus within days.

Poock compared Double Ovsynch with and without a CIDR. He will compare breeding response in these two groups in follicle development, estradiol levels, and pregnancy rates. He takes ultrasound readings at two points: prostaglandin administration and artificial insemination.  Poock and his MU students also study how a head start on breeding improves conception rates in grazing herds. Poock’s research shows that heat-stressed cows have poorer conception rates. In 2018, Foremost cows were bred in mid-May, when temperatures soared and conception rates dropped.

Poock says the farm keeps replacement heifers from AI-bred cows to Holstein and Jersey dairy bulls. Heifers from the cows bred by a beef bull will be sold.