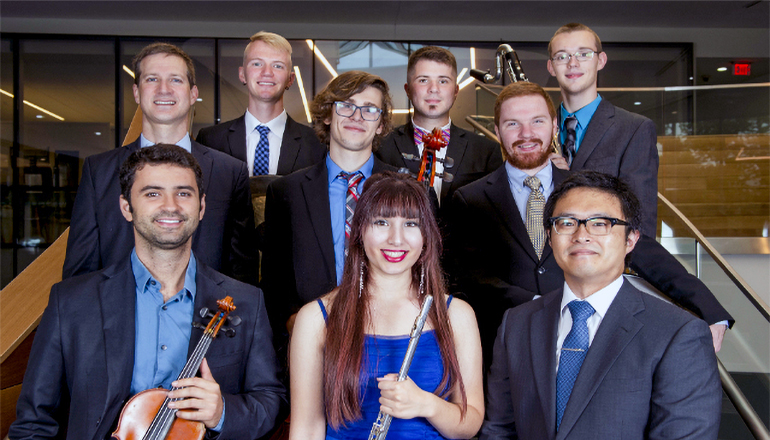 The Mizzou New Music Ensemble will begin their 2019-20 season with a concert featuring works by two modern masters, a Mizzou alumnus, and a current Mizzou faculty member.

The Ensemble will perform music by Pierre Boulez, Jennifer Higdon, José Martínez, and Carolina Heredia at 7:30 p.m. Sunday, October 6 at Whitmore Recital Hall on the University of Missouri campus in Columbia. The concert is free and open to the public.

As the name suggests, Boulez’s “Dérive 1” is derived from two of his other compositions, “Messagesquisse” and “Répons,” the latter of which in turn was created as a re-elaboration of musical ideas from “Éclat/Multiples.” This working method was typical of Boulez, who was known for producing new material by extending or transforming existing pieces.

Higdon’s “Zaka” has been called “an energetic and tightly focused work that uses string instruments in percussive and unorthodox ways,” and was praised by the Sacramento Bee as “a fantastic sprint full of irresistible Stravinskian energy and rhythmic drive.”

Martínez, who earned his master’s degree in composition from Mizzou in 2016, describes his piece “Illegal Cycles” as “an attempt to contaminate salsa with some noise, yet at the same time, to look for the groove in the fine-art sound of the freely improvised music” and “a natural product of our post-postmodern world, where the artistic boundaries between genres are happily long gone.”

“Ius in Bello” (Latin for “law of war”) was inspired by the socio-political confrontations in Venezuela that began in 2014. Heredia, a native of Argentina and an assistant professor of composition at Mizzou, calls the work “my response to the violent repression executed by the government against civilian protesters,” explaining that it “engages with dream-like sections in which color-saturated imagery of a perfect future is tinted with crispy dissonances.”

The seven-member Mizzou New Music Ensemble is made up of University of Missouri graduate students under the direction of Stefan Freund, a cellist, composer, conductor, professor of composition, and artistic director of the Mizzou New Music Initiative.

The Mizzou New Music Ensemble serves as the repertory group for the Mizzou New Music Initiative, an array of programs positioning the University of Missouri School of Music as a leading center in the areas of composition and new music.

In that capacity, they work with faculty, students, and visiting composers, and give public performances on campus and in the community. The Mizzou New Music Initiative is the direct result of the generous support of Dr. Jeanne and Mr. Rex Sinquefield and the Sinquefield Charitable Foundation.