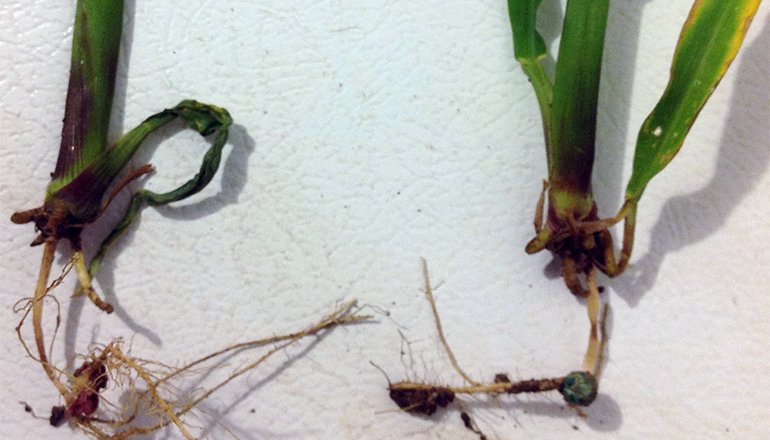 He urges farmers to look for rootless corn syndrome and heat canker in soybean, conditions that result from drought and heat effects on seedlings and young plants.

Corn plants produce two root systems. The first system consists of roots that emerge from the seed and nourish the seedling. The second system contains adventitious (nodal) roots that form at stem nodes below and above the soil surface.

“This is the main root system of the corn plant,” Wiebold says.  “Plant health and yield is closely tied to the health and function of these roots.” Nodal roots are present as early as the 1-leaf stage and rapidly expand in number and length during vegetative growth. The earliest nodal roots form about 3/4 inch below the soil surface.

All roots require soil moisture to form and grow. Corn nodal roots form near the soil surface and depend highly on soil moisture there. In most years, spring precipitation keeps the soil wet enough for roots to grow, but early-season drought can dry soil to a point where roots cannot grow. This is compounded by high soil surface temperatures. Root growth is inhibited and even prevented by hot, dry soil.

A syndrome called rootless corn may occur. Affected seedlings grow normal primary roots—those roots that developed from the kernel—but they lack adventitious roots. “These plants may appear normal but begin to lodge when plants are about 15 inches tall because they are weakly anchored,” Wiebold says. Most Missouri corn is well past any concern. However, late-planted corn, including replanted fields, may be vulnerable to rootless corn syndrome if the soil surface is unusually dry.

Preventive actions are few. “If replanting corn, try not to till,” Wiebold says. “Tillage wastes precious water.” Previous crop residue that remains on the soil surface reduces water evaporation and slows the rise in soil temperature.

“Heat canker is an unusual occurrence in soybean related to soil surface temperature,” says Wiebold. Because evaporating water cools the soil, the condition usually occurs when precipitation is sparse and the soil surface is extremely dry.

Emerging soybean seedlings up to V2 are vulnerable to heat canker. Young cells in the region where the hypocotyl touches the soil surface cannot tolerate high temperatures. The dead cells can occur as a ring around the stem or just on one side. The region appears “pinched” because water escaped and cells shrunk. The region will darken quickly. Affected plants often die. With heat canker, the root system remains white and looks normal. This can be used to distinguish heat canker from seedling diseases in which roots are discolored.

“This is a rare occurrence, but this is a year with rare combinations of sparse precipitation and hot temperatures,” says Wiebold. When heat canker is suspected, often only a few seedlings are affected. Very localized conditions can influence the severity.

“Hundreds of thousands of Missouri soybean acres have been planted during dry, hot weather,” says Wiebold. “Heat canker could be more widespread and affect a larger portion of seedlings than usual.”

There is little that can be done once heat canker is visible, says Wiebold. The damage has been done. No-till fields show an advantage, however. It is rare to see heat canker in no-till fields. Previous crop residue that remains on the soil surface reduces water evaporation and slows the rise in soil temperature.