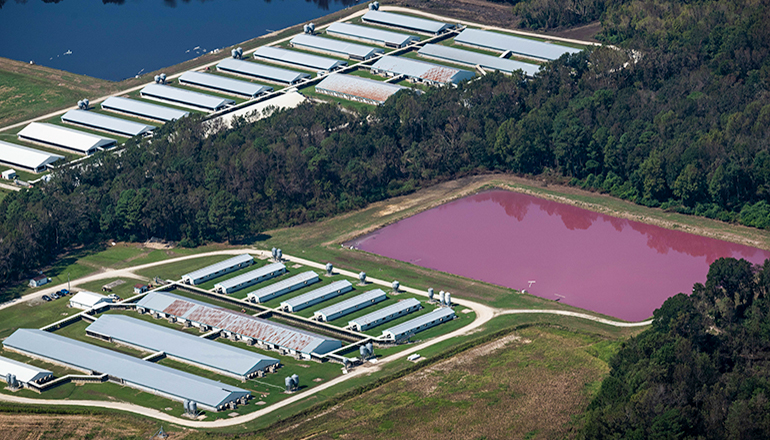 Webmasters note: This article is a commentary by Tim Gibbons of the Missouri Independent. Tim Gibbons is communications director for the Missouri Rural Crisis Center, a statewide farm and rural organization dedicated to preserving family farms and promoting stewardship of the land and environmental integrity.  The comments in the article are those of the author, Tim Gibbons, and do not necessarily reflect the opinions of KTTN Radio, the staff, or management.

(Missouri Independent) – A 10,467 hog factory farm is attempting to build near farms and homes, near the Poosey Conservation Area in Livingston County. It’s a JBS contract operation, meaning the hogs would be owned by JBS, a Brazilian corporation and the biggest meatpacker in the world.

While examining the site for the potential CAFO, shallow groundwater was found.

Perched water is groundwater that is above the main body of groundwater and below-surface water.

This possible perched water at the property is getting in the way of the JBS operation getting its permit and was discussed at an Administrative Hearing Commission meeting in 2020. So, what’s the response from the Missouri Department of Natural Resources?

Unbelievably (or maybe not), they created an “emergency rulemaking process” where they are trying to exclude “perched water” in the definition of groundwater, paving the way for this CAFO and future operations in our state and more groundwater pollution.

One response by Missourians statewide was to send letters into DNR opposing both this emergency rule and the proposed exclusion of perched water from the definition of groundwater. As early December 2020, there had been 139 comments into DNR, 137 in opposition and 2 in favor — and the two in favor weren’t individuals, but instead representing industry groups. These results show that real people and family farmers out here don’t want the “emergency” rule change.

This is also the story of countless farming and rural communities across Missouri and across our country.

The intrusion of out-of-state and foreign factory farm corporations invading our communities by way of controlling our democracy. They have not only taken control of commodity markets family farmers sell into — pushing prices below the cost of production, putting farmers out of business, and emptying our Main Streets — but also lobbying to put their industrial operations right next to farms and communities, polluting our water and decimating our property rights.

And, they are using our taxpayer dollars to build and to manage and clean up their waste.

The Missouri Department of Natural Resources is moving to sell out rural Missourians and Missouri’s groundwater. They are endangering Livingston County and one of our conservation areas so that a 10,000 head JBS hog operation can build next to homes and communities.

Additionally, JBS’s past is reportedly checkered with illegal behavior, including bribery, price-fixing, and selling tainted meat. They are certainly not the neighbors most people would want in their community.

Please, contact the Missouri Department of Natural Resources during the public comment period on this proposed rule change between now and March 25 and tell them that all bodies of water in Missouri should be protected and to stop the rulemaking process to exclude perched water from the definition of groundwater.

Photo by Jo-Anne McArthur on Unsplash

Tim Gibbons is communications director for the Missouri Rural Crisis Center, a statewide farm and rural organization dedicated to preserving family farms and promoting stewardship of the land and environmental integrity.