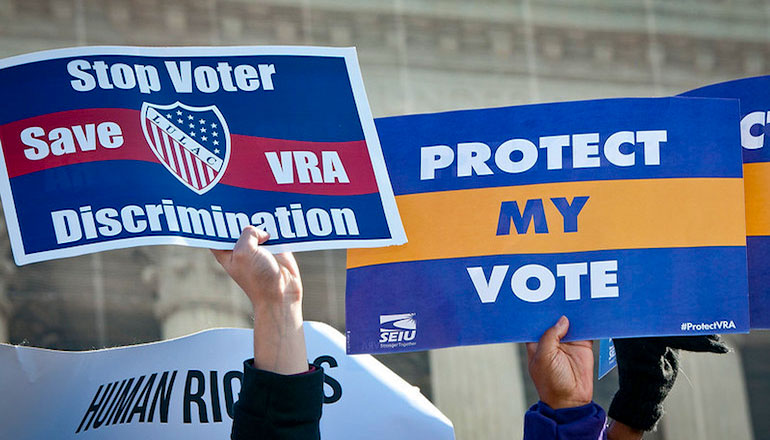 Missouri voting-rights advocates joined a national call to action Saturday to promote the John Lewis Voting Rights Advancement Act and the For the People Act.

The Lewis Act would require states with a history of voter discrimination to get approval from the Justice Department before making legal changes to voting rules.

Julie Steiger, co-president of the League of Women Voters of Southwest Missouri, pointed to data that shows nationwide, nearly 400 bills have been introduced to restrict voting this year, including in Missouri, where the state House advanced a voter ID bill last month.  “[It] helps to ensure that we’re not doing things that actually will prevent people from voting,” Steiger explained. “We have more than 200,000 people in Missouri who, if we have these strict voter ID laws, will not be able to vote.”  She added low-income residents and people in rural areas may not have a government-issued photo ID, and it may be too difficult or costly to obtain one to vote.

Cynthia Swann, the co-chair of the criminal justice committee for the American Bar Association Civil Rights and Social Justice Leadership Council, pointed out during a Rainbow Push Coalition virtual event the current voter-suppression efforts across the country come on the heels of elections in 2018 and 2020, both with unprecedented amounts of voter participation, especially from Black and brown communities.  “They’re doing it in ways of reducing ballot boxes, requiring identification, requiring other measures that are impossible in many instances to meet,” Swann asserted. “We have Native American communities who have to travel 100 miles to vote.”

Steiger noted the reforms are especially critical this year when it comes to redistricting and preventing partisan gerrymandering.  Voters in 2018 passed a constitutional amendment to appoint a nonpartisan demographer to draw maps but then overturned it last fall.  “So now our congressional districts are back in the hands of legislators to draw those,” Steiger observed. “And they have a vested interest in those districts, giving them an advantage with their constituents.”

The For the People Act bars new maps that would give either party an undue statewide advantage, regardless of intent, and strengthens protections in redistricting for communities of color.