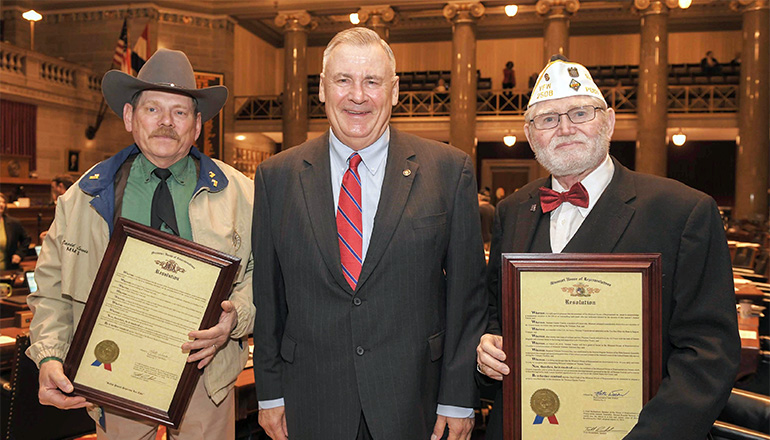 Rep, Nate Walker and several members of the Missouri House of Representatives welcomed some of the state’s greatest heroes to the State Capitol to be honored for their service to this country. Vietnam veterans traveled to Jefferson City March 29th to be honored by lawmakers during the annual observance of Vietnam Veterans Day.

For nearly two hours on Thursday morning, House members brought more than 100 veterans onto the House floor to honor and thank them for their service. The celebration included presentations of official House Courtesy Resolutions to all the attendees. The resolutions are meant to honor the accomplishments and the service of the state’s Vietnam veterans. All of the veterans in attendance ended the event by gathering for a picture in front of the Speaker’s dais as the members of the Missouri House offered their thanks and applause.

Rep. Walker, who spoke on the House floor during the ceremony, introduced David Leon Lewis, United States Navy and Thomas Chester Yunick, United States Air Force, two Vietnam Veteran heroes from the 3rd District in House Chambers. Walker said, “I was honored and humbled to recognize both Lewis and Yunick with Missouri House of Representative Resolutions in commemoration of Missouri Vietnam Veterans Day.” Lewis is a resident of rural Novinger and Yunick is a resident of Unionville.

During the event, House members also paused to honor one of their own as they presented State Representative Pat Conway with an official resolution that recognizes him for his leadership in creating the state Vietnam Veterans Day. Conway played a pivotal role in securing passage of HB 1128 in 2012. The bill designates March 30 of each year as Vietnam Veterans Day in recognition of the courage and patriotism of those who served during the Vietnam Conflict. Conway has organized the Vietnam Veterans Day events in the House Chamber each year and is himself a veteran of the Vietnam Conflict. During the ceremony, members stood and applauded Conway for all that he has done to honor and recognize Missouri’s veterans.