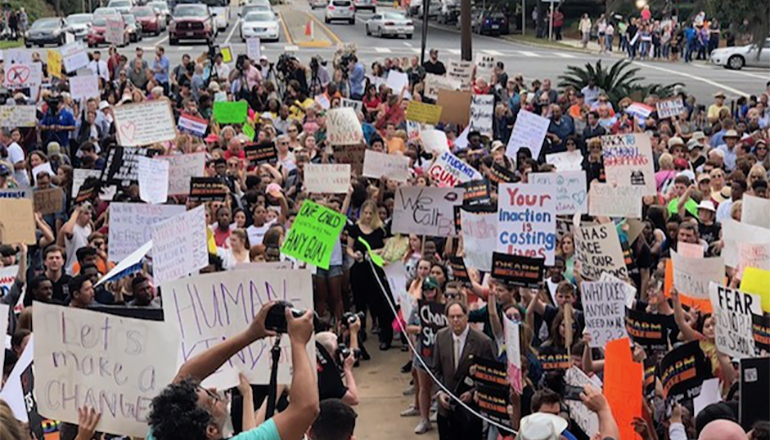 Several universities across Missouri have said they will overlook disciplinary actions against any prospective student who is punished by his or her high school for participating in next week’s national walkout to protest gun violence.

The walkout comes a month after 17 people were killed at Marjory Stoneman Douglas High School in Parkland, Fla. Thousands of students are expected to join their peers across the country in the 17-minute National School Walkout on March 14.

If you are a student concerned about a possible blemish on your permanent record for participating, some universities say not to worry, because they’re taking a different approach to peaceful, civil protests. Patrick Giblin is a spokesman for Webster University.

“We immediately do not see that as a negative mark,” Giblin said. “In fact, we mark that as a show of leadership on behalf of the students.”

In a recent tweet to prospective students, Washington University in St. Louis said: “March on.” Students from at least 14 Missouri schools, including six in the St. Louis area, have organized walkouts for that day, according to the Women’s March Network.

According to the St. Louis Post-Dispatch, St. Louis University, Fontbonne University, Lindenwood University and the University of Missouri-St. Louis also is among those who have said they won’t hold it against a high school student if they are punished.

Giblin said their application process has been in place for many years and mirrors most other universities when it comes to reviewing applications on a case-by-case basis.

“We try not to categorize our prospective students with broad swashes of a brush simply because somebody put a label on them,” he said.

The walkout, spearheaded by the Women’s March, is one of a series of walkouts and marches scheduled over the next few months to urge lawmakers to strengthen gun-control laws.