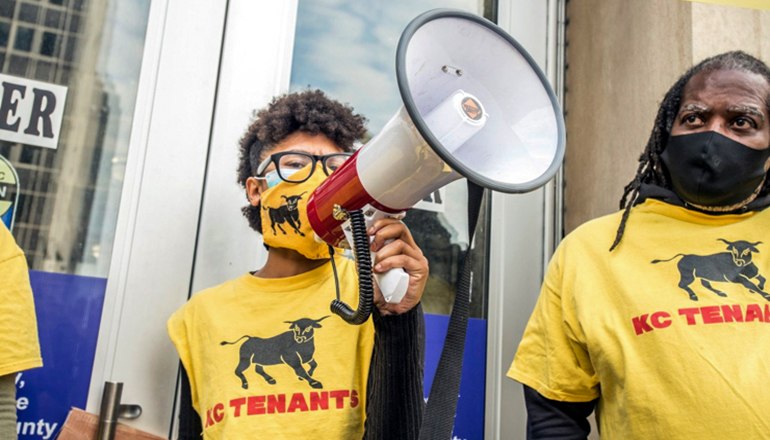 With evictions set to skyrocket after the Centers for Disease Control and Prevention moratorium ends December 31, a Kansas City tenants’ group is taking an unusual route to delay evictions, by disrupting housing-court hearings being held online.

Tara Raghuveer, director of KC Tenants, said research shows online hearings may even violate the rights of renters with disabilities or those who can’t speak English or lack internet access. Members of her group register to attend remote eviction hearings, where they speak against kicking people out of their homes during a pandemic. Raghuveer said the disruptions caused postponements, and so far have bought more than 350 renters more time to build their cases to stay put.  “We’ve gotten cases delayed all the way to January and February,” she said. “We’ve also pushed the judge with the highest-volume eviction docket in Kansas City to end her hearings entirely, as a result of our repeated online-teleconference disruptions.”

In a statement, the president of Landlords, Inc., Robert Long, charged that KC Tenants is more interested in changing the for-profit housing model than in assisting renters. He said he thinks the group would be more effective if it worked with social-service agencies to help people catch up on their rent.

KC Tenants also is using more conventional methods to intervene. It teamed up with the ACLU of Missouri in a lawsuit against the Jackson County Circuit Court for letting evictions proceed despite the CDC moratorium. Raghuveer said the suit mostly targets large corporate landlords and added that she thinks some are using the pandemic as an excuse to get rid of tenants.

“It is not the same thing to lose money on one’s building as it is to lose one’s home during a time when staying at home is the way to stay alive,” she said. “Too often in dominant narratives in the media, these things are lifted up as equivalent, and they’re not.”

A study by the Kansas City Eviction Project found that people of color are evicted at a higher rate in the city than are Caucasian renters. It also concluded that eviction has the deepest impact on Black and Brown neighborhoods there.