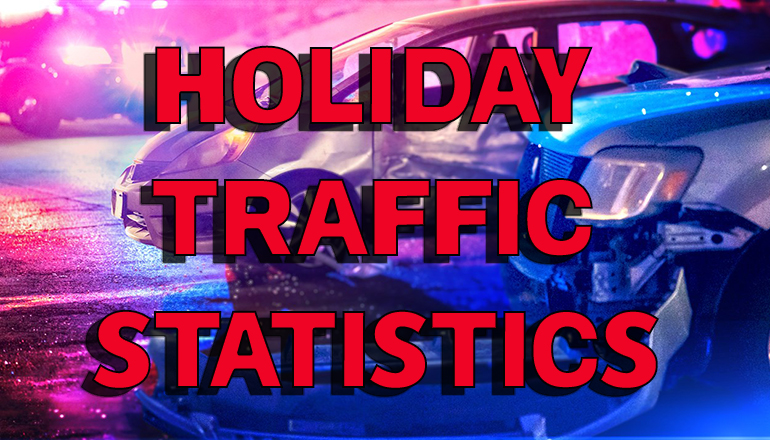 During the Thanksgiving holiday counting period, troopers report the following traffic statistics for 2022:

One traffic fatality occurred during the counting period on Wednesday, November 23, 2022. Richard P. Hayden, 67, of Jonesburg, MO, died after he had exited his vehicle, which was stopped on Interstate 55 and partially blocking the right lane. Another vehicle struck the left rear of Hayden’s vehicle and then Hayden. The crash occurred in Perry County at the 130.8-mile marker of Interstate 55. Dr. Fite at St. Louis University Hospital pronounced Hayden deceased at the hospital. The driver of the other vehicle was not injured and was wearing a seat belt.

Five traffic fatalities occurred on Thanksgiving Day, November 24, 2022. Timothy M. Chambliss, 39, of Forsyth, GA, died when the vehicle he was driving ran off the road, struck an embankment, and overturned. Chambliss was not wearing a seat belt at the time of the crash. The crash occurred in Adair County on U.S. Highway 63 at Benton Road north of Kirksville, MO. Dr. Jill Brown pronounced Chambliss deceased at Northeast Regional Medical Center. The Adair County Sheriff’s Department, Adair County Ambulance, and Kirksville (MO) Fire Department responded to the scene.

Four people died in a traffic crash on Interstate 44 west of Springfield, MO, in Greene County. Joshua R. Wamsley, 33, of Springfield, MO, and Danielle E. Dillman, 36, of Springfield, MO, died when the vehicle Wamsley was driving struck another vehicle in the rear, traveled into the westbound lanes, and struck a third vehicle head-on. Neither Wamsley nor Dillman were wearing a seat belt at the time of the crash. The driver of the vehicle Wamsley’s vehicle struck in the rear was not injured and was wearing a seat belt. The driver and one passenger in the vehicle struck head-on, Patrick J. Holloway, 44, and Shandrea L. Holloway, 44, both of Republic, MO, also died in the crash. Both were wearing seat belts. A one-year-old passenger in Holloway’s vehicle sustained moderate injuries. She was in a child safety seat. Green County Medical Examiner Buddy Pilmore pronounced both Dillman and Patrick Holloway deceased at the scene. Dr. Robinson pronounced Wamsley deceased at Cox South Hospital in Springfield. Dr. Stuppe pronounced Shandrea Holloway deceased at Cox South Hospital. The Patrol’s Major Crash Investigation Team #3 investigated.

There were no traffic fatalities on November 25, 2022.

Two traffic fatalities occurred on November 26, 2022. Linda K. Ridge, 69, of Warrensburg, MO, died when she turned left into the path of another vehicle. She was not wearing a seat belt at the time of the crash. The crash occurred in Johnson County on Missouri Highway 13 at Northeast 600 Road. Dr. Mark Leiser pronounced Ridge deceased at Research Medical Center in Kansas City, MO. The driver of the other vehicle sustained moderate injuries; he was wearing a seat belt. The Patrol’s Major Crash Investigation Team #1 investigated. The Johnson County Sheriff’s Department also responded to the scene.

Mark A. Eduardos, 52, of Evansville, TN, a pedestrian, died after he was struck by a vehicle in Pettis County on U.S. Highway 65 south of Sacajawea Road. Dr. Davis pronounced Eduardos deceased at Bothwell Hospital in Sedalia, MO. The driver of the vehicle was not injured; he was wearing a seat belt. The Patrol’s Major Crash Investigation Team #1 investigated.

There were zero boating crashes.

There were two drownings on November 26, 2022. Uthej Kunta, 24, from India, went swimming in the Lake of the Ozarks and began to struggle. He went under and did not resurface. At that time, Shiva D. Kelligari, 25, from India, dove into the water to render assistance and did not resurface. The incident took place at the .5-mile marker of the main channel of the Lake of the Ozarks in Miller County. Marine operations troopers recovered Kunta’s body and Miller County Coroner Tim Bradley pronounced him deceased at the scene. The Missouri State Highway Patrol Dive Team recovered Kelligari’s body on November 27, 2022. Miller County Coroner Tim Bradley pronounced him dead at the scene. The Lake Ozark Police Department and the Lake Ozark Fire Department also responded to the scene.