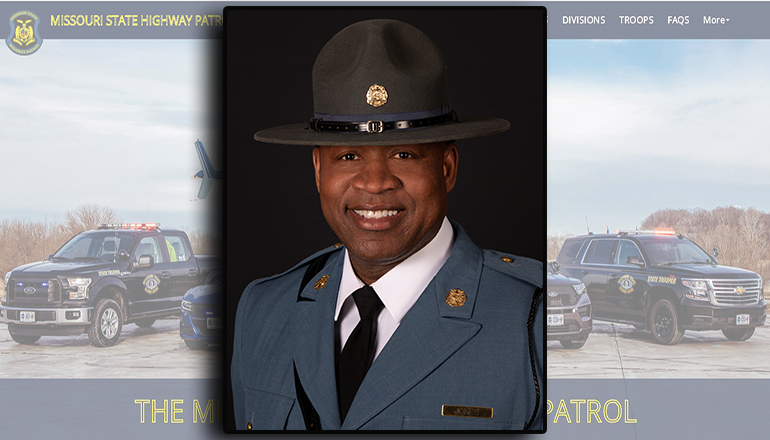 The Missouri State Highway Patrol announces Captain Benjamin C. Jones has been promoted to the rank of Major. He is the commander of the Support Services Bureau effective July 1, 2022. Major Jones will have direct oversight of the Commercial Vehicle Enforcement, Driver & Vehicle Safety, and Recruiting & Community Outreach divisions.

Jones was appointed to the Patrol on January 16, 2001, as a member of the 78th Recruit Class. Upon graduation from the Patrol’s Law Enforcement Academy, he was assigned to Troop E, Zone 8/Zone 9 New Madrid and Pemiscot counties. On October 24, 2007, he transferred to Troop E, Zone 14, as a commercial vehicle enforcement trooper. He was promoted to corporal on October 1, 2010, and sergeant on September 1, 2014, and remained in his position as a commercial vehicle enforcement trooper. On October 1, 2016, Jones was promoted to lieutenant and transferred to the Career Recruitment Division at General Headquarters in Jefferson City, MO. He was designated assistant director of the division. In July 2018, he was promoted to captain and designated director of the Career Recruitment Division. Effective April 1, 2019, the Career Recruitment Division and Office of Community Engagement & Outreach merged. Capt. Jones was designated community outreach officer and named director of the new Recruiting & Community Outreach Division.

Major Jones grew up in Clarkton, MO, where he graduated from high school in 1991. He attended Southeast Missouri State University in Cape Girardeau, MO. In 2016, he graduated from the Police Leadership-West Point Model training. He graduated from Northwestern University School of Police Staff and Command as a member of Class 419 in 2017. Major Jones and his wife Selene (Torress) have two children, Brianna and Benjamin.